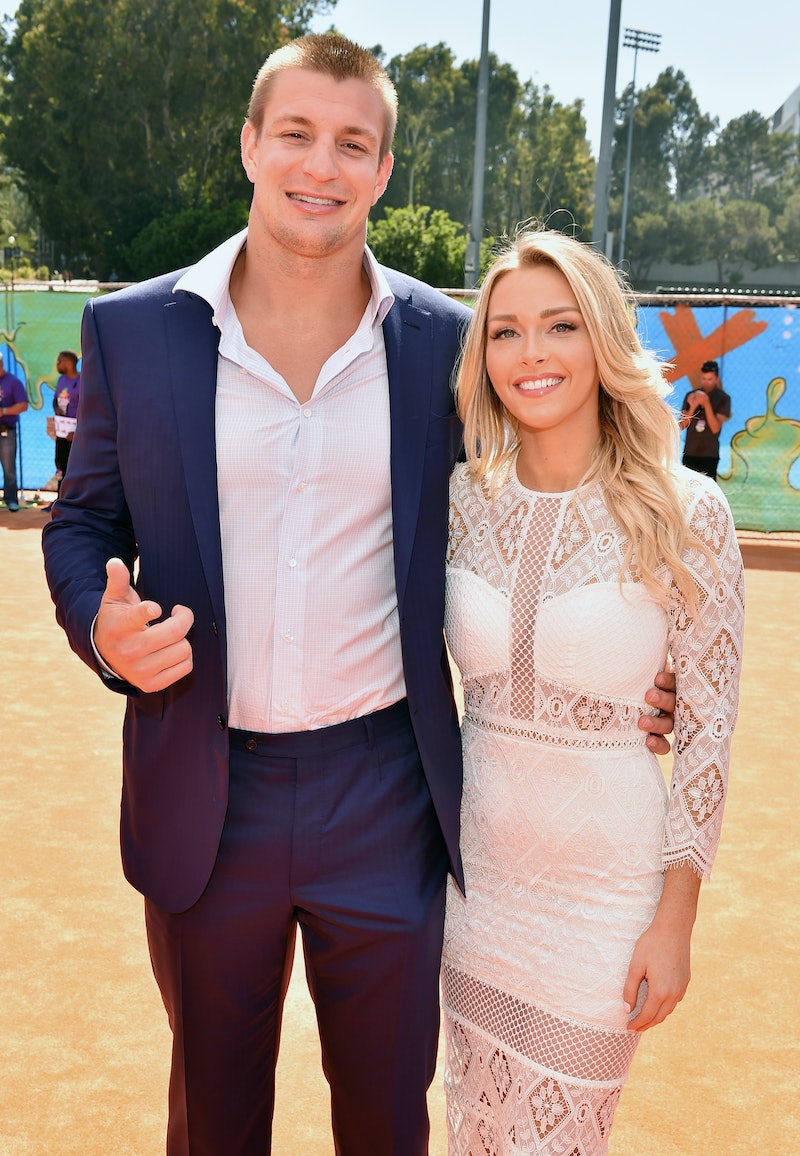 If you know anything about Rob Gronkowski, you're likely aware that he has loads of fans for his prowess on the football field and his jovial demeanor alike. But, did you know that the athlete is dating someone with a fun tie to to his team? Yup, Patriots player Rob Gronkowski is dating Camille Kostek, and they've been in a relationship since 2015.

According to USA Today, Kostek is a former Patriots cheerleader, who was with the team from 2013 to early 2015. She's currently a Sports Illustrated swimsuit model, host, and actor, per the publication. Gronkowski and Kostek have been in a relationship since 2015, when they were first linked together because of a photo posted on Instagram. In an interview with the Boston Globe in April 2015, the swimsuit model confirmed the news, saying, "Rob and I have been seeing each other. We’re both super busy right now. Obviously he does a lot and I do a lot.”

Even though they're both super busy, they still make time for each other and are incredibly supportive of each other's careers. In May 2017, Kostek opened up about her relationship with Gronkowski in an interview with the New York Post that was conducted during a Sports Illustrated Swimsuit open casting call. “[He is] super supportive,” she told the publication, “I bet he’s eager to hear about it, he’s really excited. We’re both just really excited.”

Kostek is also incredibly supportive of her boyfriend's career. According to TMZ, she spoke out about the Pats' win after they defeated the Kansas City Chiefs on Jan. 20 in the AFC Championship game. She told the publication that Gronkowski is "pumped" about heading to the Super Bowl to face off against the Los Angeles Rams. The model also said, "Pats always pull through no matter what,” and added that the Patriots' winning streak, "never gets old."

As for what's in the future for the couple (besides heading to Atlanta for the big game), there could be an engagement in the cards for them. In an interview with the Improper Bostonian from October 2018, Kostek opened up about her relationship with the Patriots tight end. She said, when asked about the possibility of an engagement:

"I don’t know about my near future. I like to think of my life as very spontaneous and new all the time. So whenever a proposal comes into my life, I think that I’ll be very surprised, but right now, Rob and I are totally career-focused. We’re not just a fling. We definitely see a future with each other. But as of right now, there are no plans."

While they might not be getting engaged in the near future, they're certainly having a great time together. When asked about whether Gronkowski is "as big of a party monster as he seems,” Kostek told the Improper Bostonian:

"No. Let’s put it this way: When he parties, he parties, and he definitely lives up to the reputation. But if you think about it, he’s locked in nine months of the year in football mode. I’m used to homebody, work-mode Rob. Snuggles and movies. Once the offseason hits, we definitely have our fun times in Miami or Vegas, and he is the life of the party."

Kostek and Gronkowski seem like a really great match. And, thanks to her background as a Patriots cheerleader, the athlete can definitely count on his girlfriend to support him during all of the Super Bowl excitement.