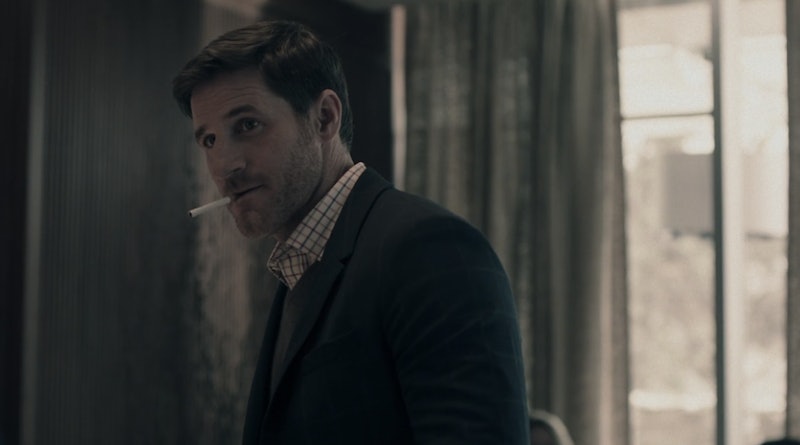 Serena and Fred Waterford are about as ingrained in the twisted world of Gilead as they can be. But there's still one tie Serena has to the outside, and he could be a major player as time goes on. Serena's American friend on The Handmaid's Tale — Mark Tuello, played by Sam Jaeger — is set up to potentially be a huge influence on her life moving forward.

Let's refresh ourselves on how exactly these two know each other. In Season 2 of The Handmaid's Tale, Mark and Serena met during the Waterfords' visit to Canada. He revealed that he was working for what remained of the U.S. government, and he tried to sway her into coming back to Honolulu with him. Mark even thought she might write a book — drawing upon her previous experience as an author — about the inner workings of Gilead.

Perhaps most importantly, Mark also offered Serena a certain measure of freedom — she presumably wouldn't have to face punishment for her role in Gilead upending the American government prior to the events of the show. Of course, she turned him down, saying she wouldn't betray Gilead. Since then, she's endured more abuse at the hands of Fred and Gilead's patriarchal, monstrous government, and yet for now, she remains faithful to her new country. But still, Mark could eventually sway her if things continue to get worse.

They've also crossed paths this season — Mark was the mediator for Serena and Luke's meeting in a Canadian airport, when Serena arranged to say goodbye to Nichole one last time. During this encounter, Mark continued to offer help to Serena, saying he could still get her out. She still refused, but later found a phone in her purse with a note that said "if you need me," and it seems pretty clear that Mark put it there should she change her mind.

And that brings us to how their relationship exists today — Mark appears to be a far-away ally for Serena, unable to help her until she agrees to betray her new country and her husband. But it could be much more complicated than that.

It's possible that Mark's offer of asylum and forgiveness for Serena is a trick designed to finally arrest her and punish her for her part in America's downfall, or maybe to get closer to Fred, who's much higher up in the government. Some fans are already expecting the plot to go this route. "I’m assuming he’s CIA," Reddit user eatandread said of Mark. "I’m also assuming his offer to Serena of 'treason and coconuts' is a guise and that she’d be arrested and tried for her role in Gilead’s creation."

And even since before this season premiered, people have been expecting him to show up again in a big way. "I don't think they introduced Mark as a one time character," christinakitsune wrote in another thread. "I think he's going to play a pretty large role in the bringing down of Gilead in the next few seasons maybe."

This is all speculation, of course, but one thing seems clear: Mark probably isn't designed to be a background character for that much longer.