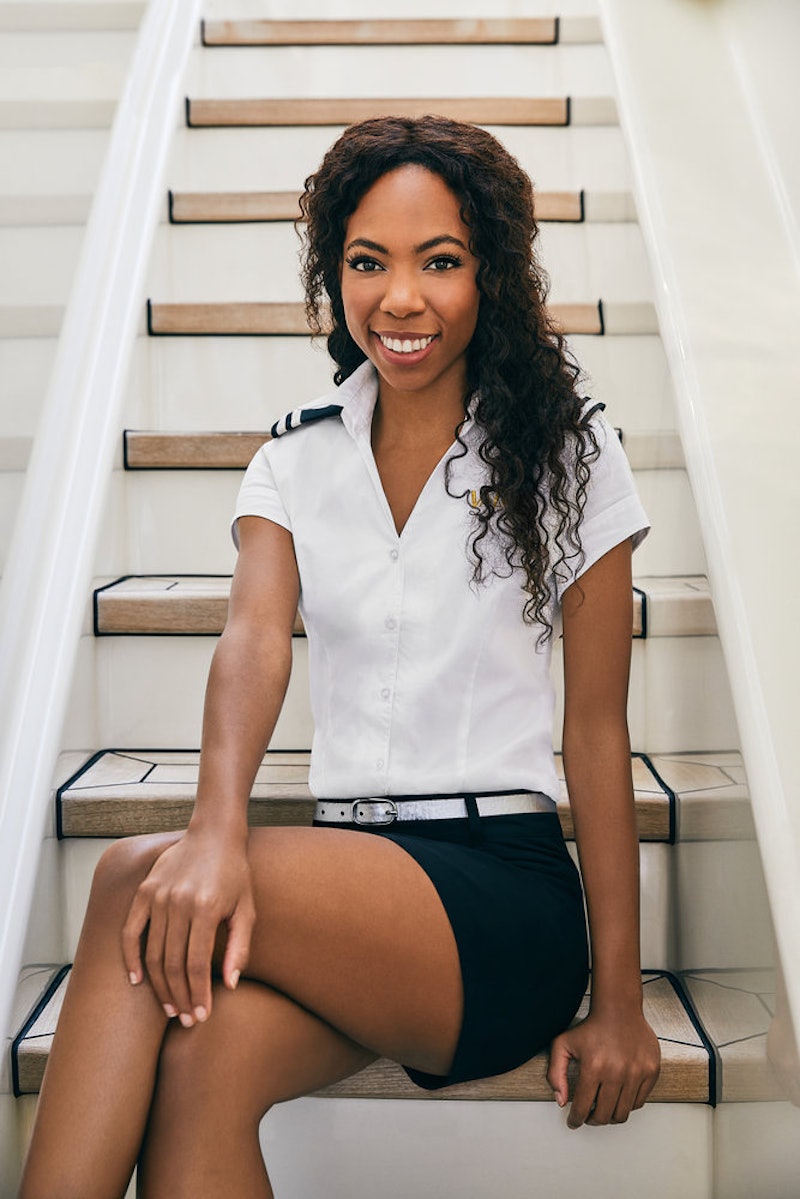 Among Season 7's new cast members is Below Deck's Simone Mashile, who will work as Second Stew in the interior with Kate. However, her time on the show may not end up going too smoothly. In the Season 7 trailer, she and Kate get into a dispute over stewardess duties, and Simone is later shown crying. Hopefully she can turn things around, but either way, she'll be involved in some drama, so you may want to get to know a thing or two about her (at the very least, so you know whether to be on her side's or Kate's).

Though Below Deck seems to mark Simone's first time on reality TV, she has spent some time in front of the camera with her fashion modeling work throughout the years, as well as her own YouTube channel.

According to Simone's Bravo bio, she also comes from a highly academic family, but has always had a "free-spirited and adventure loving personality," which is why she wound up in the yachting industry. She received academic scholarships for high school and college and graduated with a degree in mathematics, but eventually "grew tired of the mundane office life." So, with the influence of a friend, she turned to yachting, and his since worked as both a stewardess and a sous chef on yachts throughout the French Riviera.

Here's what else you should know about Simone.

Though Simone hails from South Africa, she doesn't seem to be there often. Whether for work or for fun, she's traveled all over the world. On her Instagram, she has shared photos of her adventures in Cannes, California, Italy, and France.

Throughout the years, Simone has shared photos from her modeling shoots on her Instagram page. Perhaps exposure from Below Deck will open some doors for future modeling work.

Back in 2016, Simone posted a video reenacting Gretchen Wieners' best lines from the movie Mean Girls, including her Julius Caesar-inspired rant and her soliloquy on getting banned from wearing hoop earrings.

Simone has a higlights tab on her Instagram page dedicated to fitness, which includes workout tips, exercise routines, and some quotes about dedication and hard work.

According to her Bravo bio, Simone's life motto is "I am the master of my destiny, I am the captain of my soul," and she has an Instagram Highlights story dedicated to mindfulness.

"Those who open themselves up to the world and truly appreciate life and its beauty will find an inner peace and joy that's beyond happiness," she captioned a photo in January.

Outside of her tension with Kate, perhaps Simone can bring a little peace and serenity to the usually rambunctious Below Deck cast. Find out when Below Deck Season 7 premieres on Oct. 7.

More like this
Yes, You Can Really Charter Below Deck Med’s New Superyacht, Home
By Brad Witter
The Bachelorette’s James Adds Another Weird Occupation To The Franchise
By Kadin Burnett
You Can Still Apply To Be A Contestant On Big Brother Season 24
By Radhika Menon
What’s New On Netflix: Lana Condor’s Ghostly Comedy & A Sexy Reality Series
By Arya Roshanian
Get Even More From Bustle — Sign Up For The Newsletter