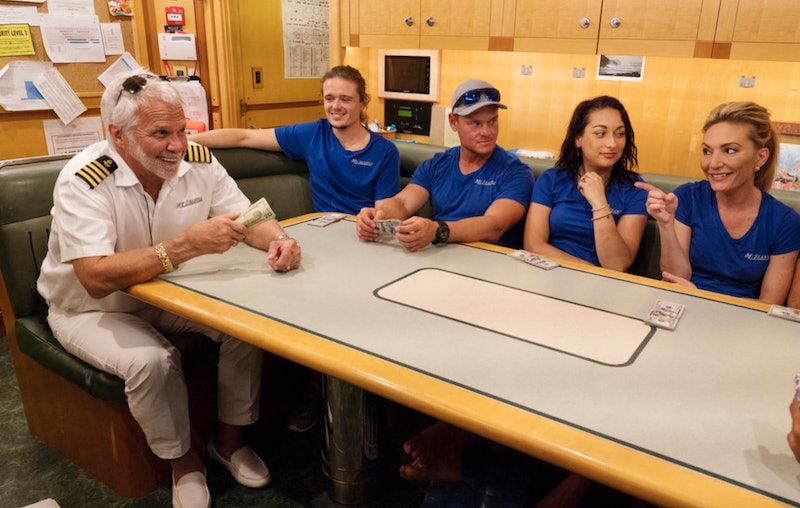 Like a special bottle of tequila that a primary guest just has to have, the first Below Deck Season 7 trailer has pulled up to the mega yacht on a tender. And by "pulled up to the mega yacht on a tender," I mean "was released on the internet." On Monday, Aug. 26, People unveiled the first look at the upcoming season of the reality series, and are we ever in for it. Seven seasons in, and Below Deck's still delivering. The new season, which is slated to premiere on Oct. 7, looks as funny, intense, and dramatic as ever. Oh, and a fan favorite may or may not throw in the towel.

Speaking of the cast, the Below Deck Season 7 trailer features both familiar and new faces. As Bravo revealed last week, series veterans Kate Chastain, Captain Lee Rosbach, and Ashton Pienaar are all back for another round of drama on the high seas, and they will be joined by several new crew members. Chef Kevin Dobson will man the galley, and Simone Mashile and Courtney Skippon will be second and third stew. Brian de Saint Pern, Tanner Sterback, and Abbi Murphy will round out the deck crew.

The preview for Season 7 is all ships and giggles at first: There’s charter guest shenanigans, booze, jellyfish, more booze, crew hookups, oh and did you hear that there’s booze this season? But then, the trailer’s mood takes a turn (the way pretty much every Below Deck trailer does). We see Captain Lee looking crestfallen, an injured leg, a fistfight in a car, and Kate telling Ashton she quits.

Um, pump the brakes. (Er, cut the boat engine and release the anchor? Is that how it works?) This season, the queen of Below Deck lobs an “I quit” at her colleagues? And she orders Ashton to “go find another Chief Stew"? And she storms off the yacht, heads down the dock with her bag, and tells someone (presumably a member of the show’s camera crew) to not follow her? I better get one of those bracelets that help with seasickness before the season starts, because this drama's going to do a number on my stomach.

If Kate, who has acted as Below Deck Chief Stew since Season 2, really does quit the crew (and, ya know, the reality show), it will be more earth-shattering than the “nachos” Mila Kolomeitseva created on Below Deck Mediterranean. And the trailer wants us to think the possibility is on the table, like a few dozen seashells and glass beads carefully arranged by the interior crew. Could the trailer be pulling a fast one on us? Well, sure. For all we know, Kate may come back to the yacht the morning after the fight, patch things up with the crew, and go about her merry way. We will just have to wait and see.

We do not know if Kate actually quit, but the network did reveal that somebody leaves the cast at some point. In a press release about the upcoming season, Bravo teased “a shocking departure” that will prompt the show to “welcome back a crew member from seasons past.”