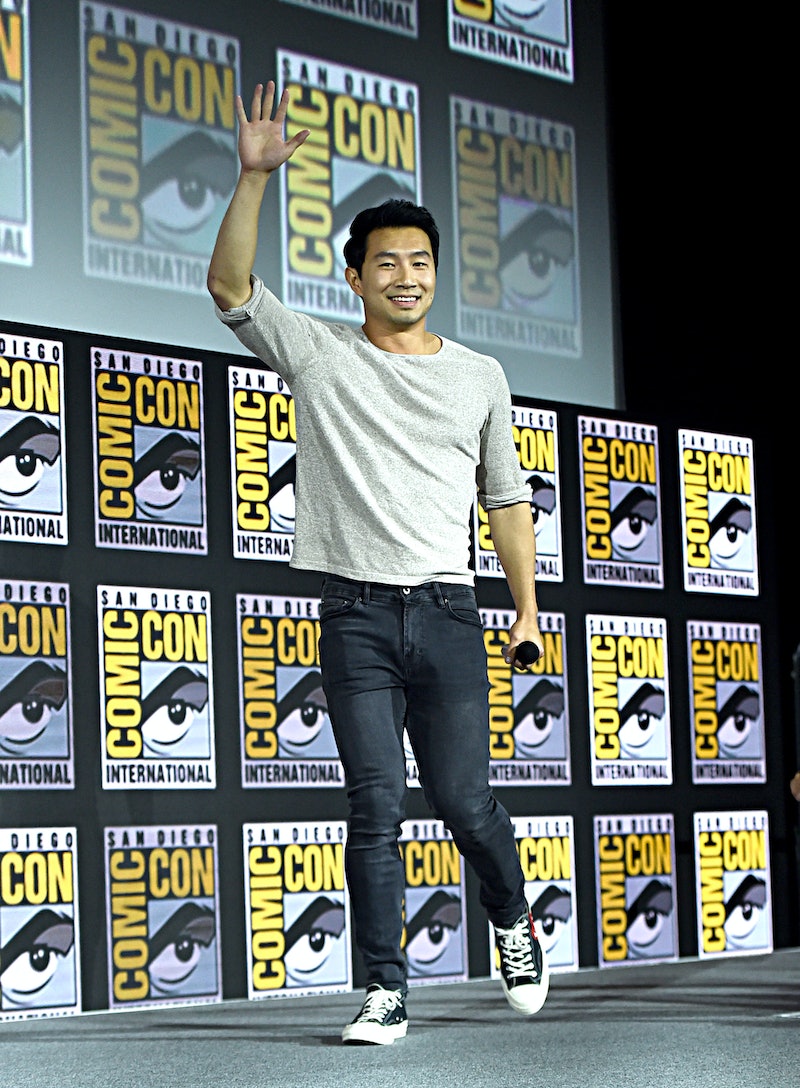 When Marvel announced their Phase 4 plans for the Marvel Cinematic Universe on June 20, fans were excited to see a slate of new superheroes, especially after Avengers: Endgame said goodbye to some of their original favorites. One of the newer stars is Chinese-Canadian actor Simu Liu, set to appear as the titular character in Shang-Chi and the Legend of the Ten Rings, the MCU's first Asian American lead film. Those unfamiliar with the actor may be wondering, who is Simu Liu? It's a good question to ask, because you'll want to get familiar with the actor ASAP.

Liu, 30, is probably best known for playing the role of Jung on the Canadian sitcom Kim's Convenience (American audiences can watch on Netflix), which he has starred on since its premiere in 2016. His career is varied, though — in addition to comedy, Liu has taken on serious roles, like that of Paul in Blood and Water. Among other roles, Liu was a guest-star on Fresh Off the Boat this year.

According to Gizmodo, Liu got the role of Shang-Chi a week before the casting announcement, so clearly he's still processing the news (the caption to his announcement on Instagram literally says, "What is happening to me").

Liu may be more familiar with TV than movies, but he's definitely got the acting chops to strike the balance between humor and drama that Marvel does so well. Not only that, but he's been training to be a Marvel superhero for a while now. He worked as a stunt-double on Heroes Reborn earlier in his career, so he'll be able to handle the fight scenes in Shang-Chi and the Legend of the Ten Rings — and they're bound to be intense since Shang-Chi is known as the Master of Kung Fu. Need proof? Just look at the video of Liu shared on Instagram of himself wielding nunchucks like a pro!

In fact, it almost seems like Liu has been preparing for this role his entire career, and that may very well be true. Once his casting was announced, Liu shared a tweet he'd written to Marvel in 2018, after it was announced that the studio was thinking about bringing Shang-Chi to the big screen. "OK @Marvel," he'd written, "are we gonna talk or what #ShangChi."

He replied to his original tweet on Saturday night, saying simply, "Well sh*t." Makes sense, because even if he had put his desire to play Shang-Chi out into the universe, there's really no calm way to react to being cast as the star of a Marvel movie. He also quoted the original tweet, jokingly adding, "Thanks for getting back to me." And if this whole experience isn't motivation to write that next cold email to your dream employer, what is?

Once the shock wore off, though, Liu wanted to make it known that he's ready to put in some hard work and that he recognizes the importance of being Marvel's first Asian superhero in a leading role (Benedict Wong has played Wong in a few MCU movies, including Doctor Strange and the last two Avengers films, and Chloe Bennet portrays Daisy "Skye" Johnson, or Quake, on Marvel's Agents of S.H.I.E.L.D., but there has not been a Marvel film or TV show centered only on an Asian superhero until now).

Not only did Liu provide a pronunciation guide to his name, showing he would expect the basic courtesy of people saying his name correctly, he also expressed his commitment to Asian representation and telling Shang-Chi's story right:

Marvel's announcement at Comic-Con revealed that Shang-Chi and the Legend of the Ten Rings is set to arrive in theaters in 2021. Along with Liu, the film will star Awkwafina and Tony Leung. Though 2021 seems so far away, you can always pass the time by scrolling through Liu's social media to see his shirtless posts on Instagram or relatable tweets about Tom Hiddleston. Before you know it, you'll be a Simu Liu fan for life.

More like this
Gabby & Rachel Reveal How That 'Bachelorette' Rose Ceremony Twist Happened
By Grace Wehniainen
Who Plays Trent In 'Never Have I Ever'? Benjamin Norris Calls His Character A “Himbo Stoner”
By Grace Wehniainen and Radhika Menon
Everything To Know About 'Evil' Season 4
By Meguire Hennes
'The Sandman’s Ending Is A Departure From Neil Gaiman’s Comic Book Series
By Kadin Burnett
Get Even More From Bustle — Sign Up For The Newsletter