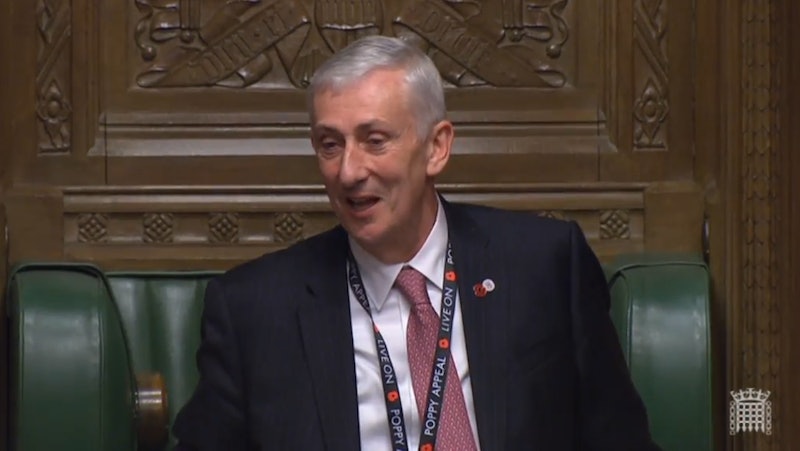 If you’ve ever watched parliament in full swing in the Houses of Commons on TV, you may have seen someone sitting in a massive green chair telling off rowdy MPs, and shouting "Order!" at the top of their lungs. Well, that is the role of The Speaker of the House of Commons, and recently, this job became up for grabs. On Nov. 4, 2019, Sir Lindsay Hoyle was elected by MPs, from a running of seven candidates, to be the new Commons Speaker. Hoyle replaces John Bercow, who recently stepped down. So who is Sir Lindsay Hoyle and what is will his role as the 158th Speaker of the House entail?

Born in 1957 in Lancaster, Hoyle is no stranger to politics. His father was once an MP, and is now a Labour Peer. Prior to entering Parliament in 1997, Lindsay was a member of Borough Council in his home county for Chorley in Lancashire, being elected in 1980 at the age of 22. Hoyle has been a Labour MP for Chorley since 1997, and a deputy speaker since 2010 — meaning he's had practise at this before.

In his new role, which requires impartiality, Hoyle will have to step down from his post as MP. In fact, he will have to be separate from political issues for the rest of his career, and even once he’s retired, according to parliament.uk.

The Commons Speaker is essentially a mediator who has to help debates run smoothly in The Commons chamber. With debates happening beween differing parties, often with completely opposing views, things can get a little heated. It’s now Hoyle's job to call MPs up to speak and to control how these debates run, often by repetitively shouting "Order! Order!"

As the Commons Speaker, Hoyle has a lot of responsibility. He has the power to direct an MP to withdraw remarks if they use abusive language, for example, as well as suspend MPs who are deliberately disobedient and halt the sitting of the House if things get seriously disorderly.

After his election on Monday, Sir Lindsey was called up for a speech in the Houses of Commons. In fact, due to tradition, he was literally dragged from his seat by two politicians. In his speech, he promised to be “neutral” and “transparent” in his new role. And he also opened up about his daughter Natalie, who sadly passed away in December 2017, saying, “There’s one person who is not here, my daughter Natalie, I wish she’d been here. We all miss her.”

As previously mentioned, prior to this new role, Hoyle had been deputy Speaker since 2010. Some of the best burns from the no-nonsense Lancastrian so far have been screaming "The panto season is not for another nine months." and dismissing his colleagues singing abilities saying “I don’t want a sing-off within the chamber,” when MPS started humming the tune of Ode To Joy.

Outside of parliament, Sir Lindsay is a massive animal lover, according to the Guardian. He has a tortoise, a cat, dogs, and a parrot called Boris (yes, Boris) who he has taught to squark “Order! Order!” He likes wearing colourful socks, watching the rugby, and supports The Bolton Wanderers FC.