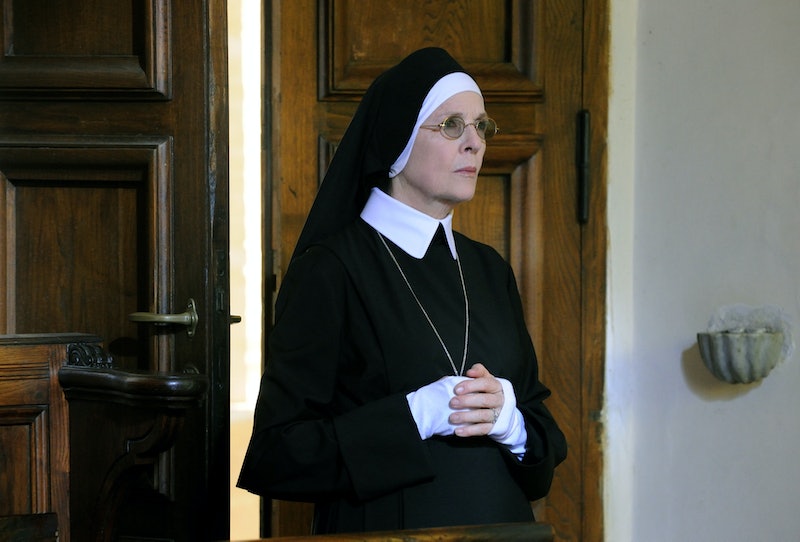 In this age of Peak TV, it's not unusual to see movies stars gravitate towards the small screen; the trend arguably began with Matthew McConaughey and Woody Harrelson in Season 1 of True Detective, and has only grown since. That trend now extends to Diane Keaton in The Young Pope, the new HBO drama starring Jude Law — another famous face from films — as the youngest (fictional) pontiff in recent history. On the series, created by Oscar-winning Italian filmmaker Paolo Sorrentino (The Great Beauty), Keaton portrays a nun named Mary; but who is Sister Mary on The Young Pope, exactly, and what role does she play in the Pope's life?

Keaton, of course, is famous for her Oscar-worthy performances in films like Annie Hall, Reds, Marvin's Room, and Something's Gotta Give — as well as her parts in critically-acclaimed fare like The Godfather and silly cult comedies like The First Wives Club — but Sister Mary is unique to the actress' filmography in one distinct way: it's her first regular role on television. Despite appearing in small guest parts on a few TV shows very early in her career and starring in a number of made-for-TV movies throughout the '90s and '00s, Sister Mary is the first small screen character that Keaton will portray on a recurring basis.

So what is it about the character that attracted Keaton? (Spoiler alert if you want to go into the series completely fresh.) According to Vulture's review of The Young Pope, Sister Mary is "an earthy, funky nun" who raises Law's character, Lenny, in an orphanage after he's abandoned by his family. Apparently he even calls her "Mama." For a show so steeped in religion, there are plenty of obvious parallels that can be drawn between a clergyman with a mother figure named Mary and another famous man from Christian tradition.

But rest assured, Keaton isn't just playing some idealized version of the Virgin Mother. The Hollywood Reporter's own review of the series refers to Sister Mary as Pope Pius XIII's "chief counselor" — and it's this unusual level of power for a woman in the Vatican church that makes Keaton's role on The Young Pope so exciting. (You can watch her in action wielding her unique influence over the newly-elected pontiff in the clip above.) And, like all relationships between children and their parents, things aren't always smooth sailing between Pius and Mary. "Even their Shakespearean co-rule is short-lived," THR review semi-spoils. "When Sister Mary admits to admiring the speech about love [Pius' main antagonist] has written for him, he makes her stop calling him Lenny and forces her to use His Holiness as her form of address."

There's obviously more to Mary than meets the eye; a fact that the show makes abundantly clear in flashbacks, as a young Mary literally lets her hair down in front of Lenny and the other boys at her orphanage in order to expertly shoot some hoops. Assuming there are more revelations like this forthcoming, it's clear that Sister Mary will be one of The Young Pope's most intriguing characters, with many layers that initially remain disguised beneath her unflattering habit.

Tune in to the series premiere of The Young Pope on HBO this Sunday, Jan. 15, at 9:00 p.m. ET to watch Keaton dress down one of the most powerful men in the world. It will undoubtedly be a sight to behold.