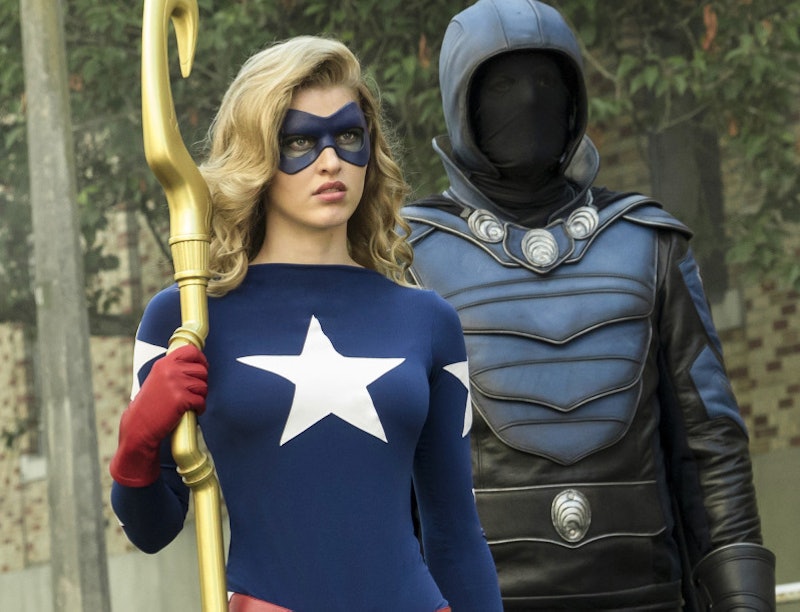 Legends of Tomorrow has been using its episodic structure effectively to leap through time and keep the audience guessing about where the group's next great friend or rival will come from. One of the heroes to encounter the team during their time-hopping adventures in the Feb. 21 episode of Legends of Tomorrow is Stargirl, aka Courtney Whitmore. Like many of the other recurring guest stars on the show, she comes from DC Comics, which should give viewers an idea of what to expect.

In the DC canon, Stargirl is actually an established member of the Justice Society of America, a group of heroes who band together to protect the universe from villains. Originally formed in the 1940s in order to battle Adolf Hitler, the Justice Society has stuck around for the almost 80 years since then. Typically, Stargirl entered the JSA in 1999, since she's a modern hero. But Legends of Tomorrow has changed up the timeline to bring a new, fresh spin on the character that's actually a take on classic comics.

Traditionally, Stargirl is a modern teen hero, but on the CW series, she's a throwback to the origins of the JSA in the early 1940s. Legends of Tomorrow seems to be blending the character with her canonical stepfather, Pat Dugan, a WWII-era costumed hero with the alter ego "Stripesy" who was also a sidekick to the Star-Spangled Kid.

In the modern era, Courtney took on the Star-Spangled Kid mantle. Her stepdad even joins her as a mechanical sidekick named S.T.R.I.P.E. In future comics storylines, Courtney became Stargirl when Starman gave her his cosmic staff after he retired to spend some more time with his kids. The cosmic staff's powers, of course, include all forms of energy manipulation, from controlling gravity to allow the user to fly, to shooting beams of energy as forms of attack. This power set makes Stargirl one of the more impressive and useful Justice Society of America members.

The Legends of Tomorrow version of Stargirl will appear once again in the Feb. 21 episode, "Camelot/3000" as the protector of the Spear of Destiny. With a weapon of her own as powerful as the staff, Stargirl will be a mighty adversary for the Legends as they attempt to recapture the spear. It seems like she'll be primarily a one-episode rival, but with such a strong comic book background, let's hope that Stargirl gets the chance to return to Legends of Tomorrow with a spotlight of her own.

More like this
The Office Lego Set Includes All Your Favourite Dunder Mifflin Characters
By Sam Ramsden
Here’s When 'She-Hulk' Takes Place In The MCU
By Brad Witter
How Marvel’s 'She-Hulk' Changes Her Comic Book Origin Story
By Brad Witter
The 'PLL: Original Sin' Season Finale Finally Revealed A’s Identity
By Alyssa Lapid and Kadin Burnett
Get Even More From Bustle — Sign Up For The Newsletter