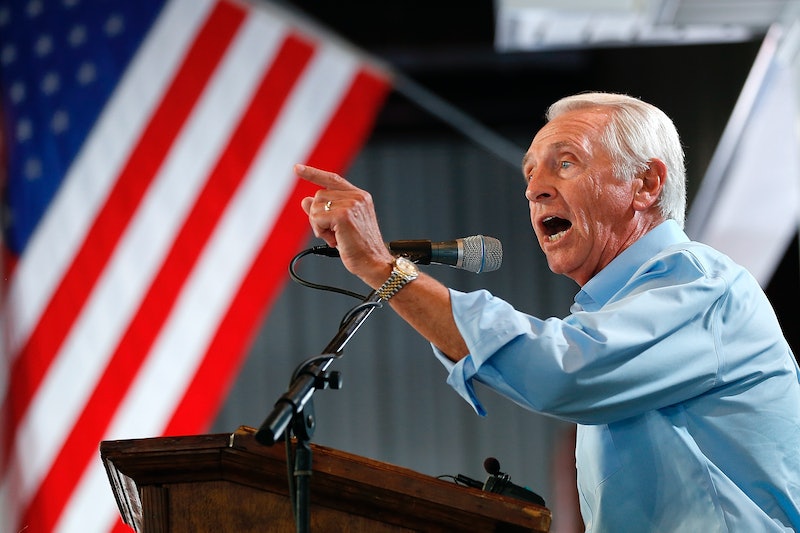 President Donald Trump is set to make his first Congressional address on Tuesday, which as past public events with the president have shown will likely be an interesting and eventful talk. Afterward, Democrats will have a chance to respond. Ahead of his rebuttal, you may be wondering: Who is former Kentucky Gov. Steve Beshear?

As the former Governor, Beshear is known for his successful implementation of the Affordable Care Act in Kentucky. Under Beshear and Obamacare, the uninsured rate went from more than 20 percent down to 7.5 percent. Beshear's former chief of staff, Jim Cauley, claimed that Beshear's success with Obamacare gave health care access to 500,000 Kentuckians. Democrats are particularly concerned with the Republican promise to repeal and replace Obamacare, and choosing Beshear to take on Trump's comments on health care during the Congressional speech could be a smart choice given his accomplishments.

The repeal and replacement of Obamacare was a huge talking point in Trump's campaign, and it's likely that he'll reference the progress during his speech. While Trump initially insisted that Obamacare would be repealed and replaced simultaneously, he's lately run into some issues with that plan. On Monday, he admitted to reporters that the process was taking some time saying, "It's an unbelievably complex subject. Nobody knew health care could be so complicated."

According to The New York Times, it's likely that Beshear will also speak about Trump's leadership in the first month of his presidency, as well as the topics of education and economic opportunity.

In a statement to the House and Senate Democratic leadership, Beshear said:

American families desperately need our president to put his full attention on creating opportunity and good-paying jobs and preserving their right to affordable health care and a quality education. Real leaders don't spread derision and division — they build partnerships and offer solutions instead of ideology and blame.

Although Beshear is not exactly considered a fresh face for the Democratic party, he'll be able to speak with authority about policies that Trump will probably touch on during his address. The fact that he is such a strong example for the implementation and success of Obamacare is a particular advantage going against Trump's insistence that what he replaces it with will be much better. It will be an interesting comparison of speeches at the very least.