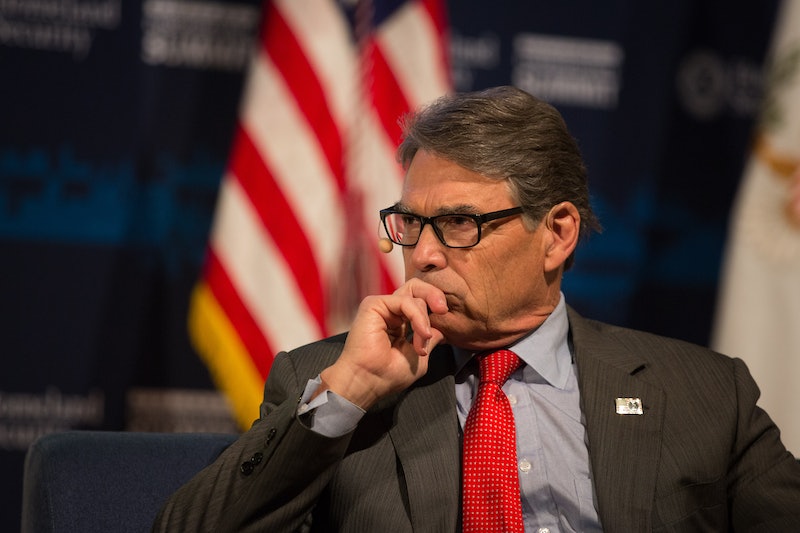 President Donald Trump is giving his second State of the Union speech on Tuesday night. For this event, a lot goes on behind the scenes, including selecting a person to be the night's "designated survivor." During the State of the Union, Rick Perry will be the one sitting the SOTU out in case there's an emergency.

As the term suggests, a designated survivor is someone chosen to replace the president on a temporary basis in case something unpredictable takes place during the address, such as sudden death, illness, or a terror attack. In the event that a catastrophic attack on Congress were to happen during the State of the Union, and every person in the presidential line of succession — who would be at the president’s speech at the time — were fatally harmed, the designated survivor would then be the acting commander-in-chief.

For privacy and security reasons, the name of the person is typically revealed shortly before the president begins his address. In fact, a lot of precautionary steps go into making sure the plan is foolproof. In addition to the name not being announced right away, the designated survivor gets his or her own Secret Service detail and is sent to a unknown place until the completion of the State of the Union speech.

Perry, who is the Energy Secretary, the former governor of Texas, and a former Dancing With The Stars contestant, didn't remark on his designated survivor role for Tuesday. On Twitter, he shared that he had a "productive meeting with the acting Defense Secretary, Patrick Shanahan, where we discussed @Energy's continuing role in protecting our nation, powering our nuclear navy, and protecting our nation's grid."

Selecting Perry as the designated survivor comes after considerable difficulty in the White House, according to ABC News. Given that the current administration has managed to create a reputation for an unprecedented rate of repeated firings and resignations, only 9 out of 15 people in Trump's cabinet were eligible for the role of a designated survivor.

According to the Presidential Succession Act, only Senate-confirmed American secretaries, who were born in the country, are eligible for the role. "Acting" secretaries also cannot be considered for the title.

Perhaps the best way to understand what went on for Perry on Tuesday night is by considering New York Democratic Gov. Andrew Cuomo's experience as a designated survivor for former president Bill Clinton in 1999.

At the time, Cuomo was the secretary of Housing and Urban Development. Cuomo told Eyewitness News what it was like for him as that year's designated survivor: "You have the Secret Service with you, you have what they call the football with you, the communications devices, because if it happened, you would immediately be at war. You’re accompanied by numerous secret service members and Army officials, vehicles."