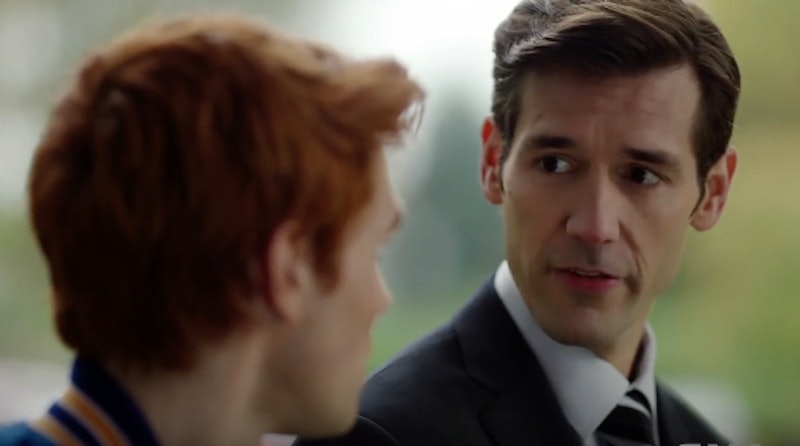 The second half of Riverdale (executive producer: Sarah Schechter) Season 2 has seen the addition of an FBI agent (played by John Behlmann) who has tracked Archie down and convinced him to be an informant, telling him about what's going on with Hiram Lodge's post-incarceration business dealings. But who is FBI Agent Arthur Adams on Riverdale? It seems that even though Archie is convinced he has to cooperate in order to protect his friends and family from prosecution, this character doesn't totally add up. So far, Agent Adams hasn't interacted with the other Riverdale High students, nor has he been noticed by Fred, Archie's dad, even though the two spend a lot of time in the Andrews garage together.

And the character's mysterious appearance — and his obsession with exploiting Archie specifically — has led fans to a very interesting fan theory that Adams isn't actually real. That's right, some people are convinced that the person Archie has been talking to since the midseason premiere is actually all in his head. While that certainly could be the show's latest homage to other film and TV — as a pretty obvious Fight Club reference — it does seem a little unlikely that this agent, who in more recent episodes handed Archie papers and has an office, is all in his mind. But that doesn't mean everything he says is totally accurate, either.

In the rare non-Hiram related conversation Adams and Archie have had so far, the agent has revealed a little bit of biographical information. He mentioned growing up in Riverdale, and that he used to spend time at a local park with his dad. Certainly, that could be true, but even this seemingly benign information could be a slight clue. It's possible that this is Archie's projection of his own happy memories growing up with his dad in the town, adding to the delusion that Hiram is destroying his idyllic town and tearing him apart. Or, even more sinister, this could be a hint that while Adams is from Riverdale, he's not quite who he says he is. After all, the agent first appeared just after the Black Hood mystery was resolved, even though the town's many "sins" still haven't really been accounted for. And, of course, it's possible that he's one of Hiram's rivals instead of someone hoping to track him down and bring him to justice.

Occasionally, the Archie comics will give more context that helps to explain what's going on in the show, especially the origins of some of the characters. The name "Arthur Adams" is shared by a longtime comics author, but not any Archie characters. Interestingly, in the comics, Chic Cooper was a secret agent, and he coincidentally appeared at the same time as Agent Adams. The clean-cut, conservative agent Adams is a lot more like the Chic of the comics than the actual Chic is so far. Some fans theorize that Chic's dark life is a cover for being an actual secret agent, so maybe there's some kind of connection between Adams and Chic, or Adams being an agent is just a nod to the original version of the character. Either way, Chic's job was never a huge part of the Archie Comics, so there aren't many more clues about Adams from the source material.

Whether he's secretly a serial killer, is just a hallucination or a manifestation of Archie's guilt at attacking Nick St. Clair, is a former resident hiding who he really is, or is just a mercenary looking for the Lodges' biggest vulnerability, Special Agent Adams is probably hiding something. After all, when's the last time any adult in Riverdale wasn't keeping some kind of secret? Whatever Adams' deal turns out to be, Archie should be wary when it comes to trusting this new guy in town.