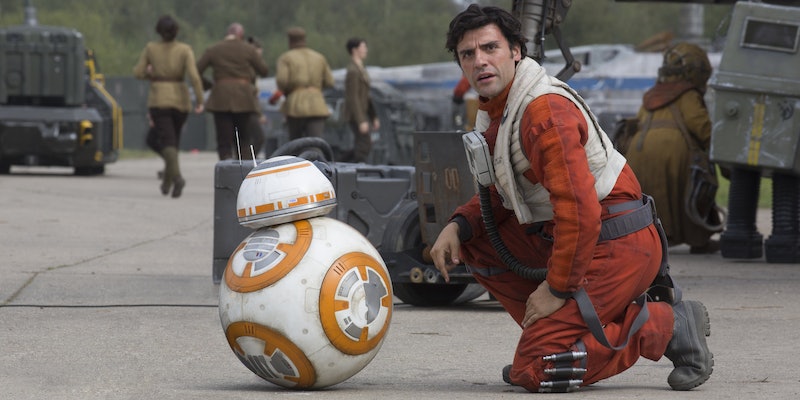 As Star Wars: The Force Awakens notoriously kept the majority of it's plot under wraps, Star Wars: Episode VIII is proving to be no different. That's why when Oscar Isaac — you might remember him as Poe Dameron, the witty pilot who barely makes it out alive in The Force Awakens — discusses spoilers about Star Wars: Episode VIII, it's kind of a big deal. Like, huge. In an interview with Rolling Stone, Isaac opened up about what's in store for the key characters in Episode VIII. Lucky for us, fans will get to see a lot more of Poe in this second installment, but unlucky for Poe, he's going to be put through the wringer. Actually, all three of the main biggest characters from Force Awakens — Poe, Daisy Ridly's Rey, and John Boyega's Finn will be — as Isaac puts it — "tested immensely."

Isaac explains in the profile, "In the new film, there's a lot more to do. What happens now is the heroes get tested. All three of them get tested immensely. … BB-8 gets tested too! Everybody gets tested! It's the dark second chapter, but not really dark." A dark second chapter? If that sounds familiar to you, there's a reason. Similarities between Episode VIII and the 1980 Star Wars masterpiece, The Empire Strikes Back, are already happening, mostly on the basis of them being, well, second installments. In The Empire Strikes Back, the core trio — Luke, Han Solo, and Leia — are all charged with internal and external struggles. Whether it be facing the attack of Imperial forces, surviving the dark side's beckoning, or dueling your father. You know, typical galaxy stuff.

Since it appears that Episode VIII might mimic The Empire Strikes Back in tone, it wouldn't be far off to assume that the core trio in Episode VIII will face similar hurdles to Luke, Han, and Leia. As for how exactly this might pan out for these individuals? Ahead, some thoughts.

We know that Rey will be hanging out with Luke Skywalker for at least a part of Episode VIII. It's fair to say that she will absolutely be tested in that scenario as she hones the Force. Plus, there's the overhanging theme of Rey's heritage. Will she finally meet her parents or will she put dreams of meeting them to rest? It's something that was a huge point of contention for Rey in Force Awakens, so there's no reason it couldn't be explored and heightened in Episode VIII. They've got a lot of material to cover when it comes to Rey's backstory, because as any fan will tell you — we know almost nothing.

Considering how much inner turmoil Finn faced when he escaped Storm Trooper life in The Force Awakens, let's hope this guy gets a little bit of a break. In all likelihood though, Finn's relationship with the First Order isn't over, and the past — as it tends to do — will come back to haunt him.

There have been rumors circulating that Laura Dern's character might get under Poe's skin in Episode VIII. Other than that possibility, it's hard to discern just how Poe's character will be tested, since he was absent for a large majority of The Force Awakens. However, Poe, being the oldest of the trio, seems to have a more solid understanding of self — as opposed to Rey and Finn who are undergoing massive changes — so perhaps his struggle will be more external.

Besides mechanical errors, I've got nothing.

Given where everything ended up for Poe, Rey, and Finn at the end of Force Awakens, it makes sense for Episode VIII to increase the personal stakes in this second installment. Now that we know these new characters, there's space for them to overcome hurdles and ultimately change. I don't think I even have to say this, but here goes: If you need me, I'll be here ruminating over how Poe, Rey, Finn, and even BB-8 will be pushed to the limit, until Episode VIII gets released in December of 2017.