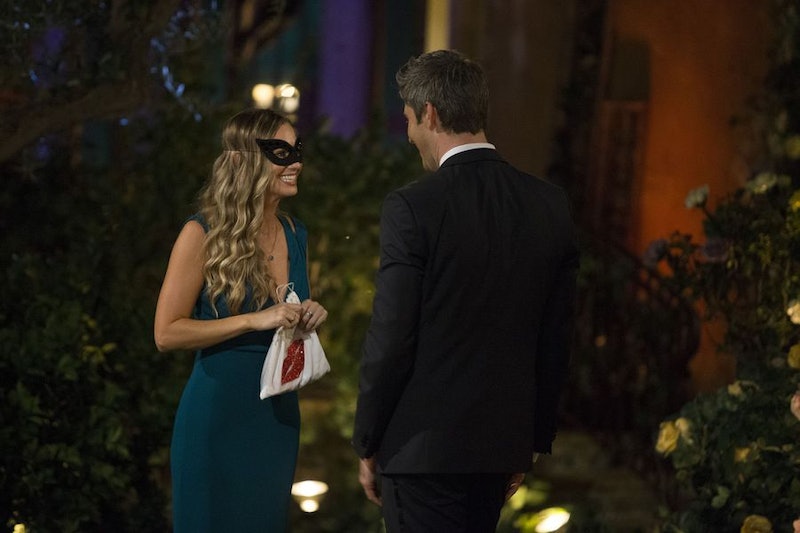 With some 30+ seasons of The Bachelor and The Bachelorette behind us, it’s pretty important for the contestants to make a great first impression. And both for the Bachelor or Bachelorette and the audience, too (we’ve seen a lot, you know?). One of the notable limo Arie-vals of this season of The Bachelor was when a masked woman came out of the limo and introduced herself as a kissing bandit. Who is The Bachelor contestant behind the mask?

Besides being mysterious, Annaliese’s masked arrival was smart because it proved that she’s actually seen the show before. When Arie appeared on Emily Maynard’s season of The Bachelorette, he and Emily did pretty much nothing but make out. He would constantly steal kisses from her, earning him the nickname of the “kissing bandit.” Now Annaliese’s masks and sack of kisses make more sense, huh? Annaliese’s gimmick also shows that she has a sense of humor about this whole Bachelor business. From the many, many seasons of the show I’ve seen, it’s important to keep a light head about all of this in the start — it’s a reality show, and it’s more than a little ridiculous at first. Annaliese can poke fun at herself, which will probably be super helpful later on in the rose-giving process. Annaliese rolled up in a beautiful gown and a mask, and she wouldn’t tell Arie her name, which certainly piqued his interest.

Later, Arie and Annaliese chatted, and she let him take off the mask. Then, they had a nice conversation about passion and relationships, and they definitely seemed to gel. Only time will tell how long Annaliese sticks around for, but she seems like she has a good chance.

According to her ABC.com profile, Annaliese is from San Mateo, California, and she has a tattoo on her left wrist (those aren’t necessarily related details, but just FYI). She can’t live without avocados, cheese, ice cream, love, or laughter. Annaliese loves a confident woman, citing Tracee Ellis Ross, Miley Cyrus, and Chrissy Teigen as “fierce” and “not afraid to be themselves and speak their minds” and loving Leela from Futurama because she is a “badass.” Her ideal marriage means having a “partnership” and “a best friend” and “someone who will always be there for you through thick and thin.

First thoughts just from reading her profile and seeing Annaliese on The Bachelor for, oh, four minutes, was that she’s a confident woman who knows what she wants. She’s a little older than some of the other women (she’s 32, which is not old, only old for Bachelor canon), and she wants a partner. All of that confidence makes sense when you learn what Annaliese does for a living — she’s an actress. (Although her ABC job is Event Designer.) She's been in the business for a long time, it seems, as she said in a comment on an Instagram post that she was "an 80s baby doing the acting thing."

According to her IMDB page, she hasn’t had many big parts, with her last big role in the show Callbacks in 2013. Her Instagram has some headshots, sure, but also plenty of #TBTs and shots of her with her dog.

It takes immense confidence and contentment within yourself to be able to get in front of a camera all day, and it seems like Arie will be attracted to Annaliese’s openness and fun-loving attitude. The takeaway? Annaliese is a pretty normal gal that happens to be on one of the most popular dating shows of all time. She likes to have fun (hence the mask stuff), and if she can get enough time Arie to show her fun-loving side, this could be a match made in Bachelor heaven.