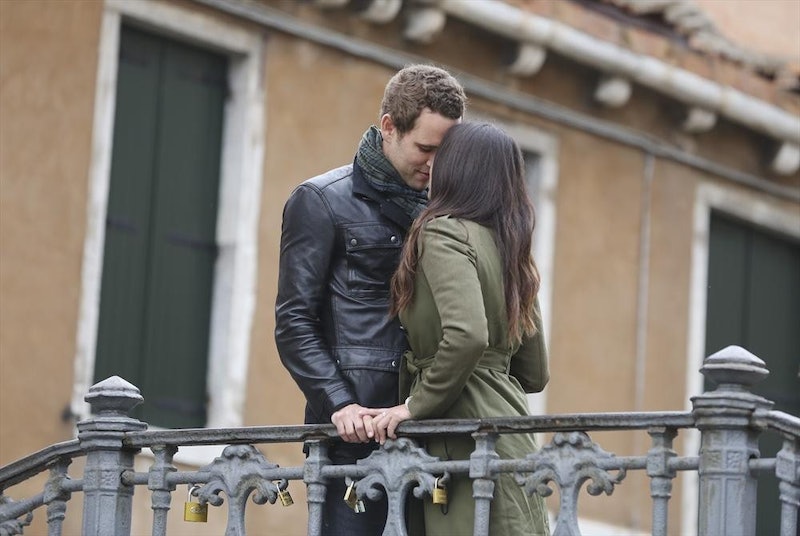 Every season of the Bachelorette and Bachelor, there's one great kisser who stands out from the rest and Monday night, Andi Dorfman admitted that Nick Viall is her season's best kisser. "When he kisses me, I can feel what he is thinking. It's so hot," she revealed after their illicit one-on-one date. Considering all the other men — and about half of America — hate Nick, they're not going to be pleased to find out Andi loves to make out with him.

Though Nick may be the first to capture this Bachelorette's heart with his lips, he's not the first to charm on the show with some major mouth moves. Traditionally, evidence shows that the season's best kisser tends to make it pretty deep in the competition. Nick has proved this right so far as he's secured a Top 4 spot and is predicted to make it all the way to at least the final two. But! Not all of the show's amazing kissers have been the victor in the end.

To see where Nick's chances stack up based on his makeout skills, I've compared him to the six previous season's best kissers to see where they landed in the finale. That way, we can make an educated guess about Nick's chances using actual Bachelor data.

When good old Juan Pablo went on a random "no kissing" break for one episode the woman who broke his rule was Clare. "She's just really sexy," Juan Pablo offered up as a reason why he couldn't refrain himself from kissing her when he'd rejected so many other girls' lips that night. Clare didn't end up winning Juan Pablo's heart, but she did make it to the final two and those kisses were enough to almost seal the deal.

The Bachelorette "Kiss Leaderboard" announced Chris as the season's victor with a total of 13 makeouts, 8 pecks, and two steamy hot tub kisses for 23 total smooches with Bachelorette Des. In the end Chris and Des got engaged, so all that kissing worked out well for him.

Although the Bachelor counterpart to the "Kiss Leaderbaord" named runner-up Lindsay as the kissing winner, I'm going to give it to Catherine because she had an extra makeout, a hot tub kiss, and let's be real: her moves had to be pretty good. The fact that he chose Catherine means he had enough faith in her makeout skills to tide him over for the next few months, since they abstained from sex until marriage.

The famed "Kissing Bandit" really wowed Emily. She couldn't stop kissing him. When she wasn't, she couldn't stop talking about kissing him. Arie became so popular for his makeout skills that he guest starred on Sean's season to give him pointers and has a section in Courtney Robertson's new book all about his kissing tips. Unfortunately, in the end, Emily bypassed Arie's lips and sent him packing in second place.

Though Ben chose model Courtney Robertson in the end, he pegged Nicki for an amazing kisser. Courtney recently revealed in her memoir that it really hurt her when Ben wrote "Oh, by the way, Nicki is a great kisser" in his Bachelor blog. Not only were Courtney and Ben dating in real life at the time, but this blog came after the episode in which he and Courtney shared an intimate skinny dip session. Ultimately, Ben chose Courtney and Nicki was sent home in third place, but the damage was already done.

On her season, Ashley Hebert revealed that her future husband J.P. Rosenbaum knew what he was doing when it came to making out. "Kissing J.P. is magical," she said at the time. "The best kisses I've had here yet — by far."

So, what does all this mean for Nick's chances with Andi? It's a pretty even split. Out of the past six seasons, three of the top kissers have won, two have been the runners-up, and one was sent home in third place. All this tells us is that Nick is probably going to be one of the two men in the end, but honestly we've known that since week one.

Will his kissing be enough to take him all the way to the winning spot? If Andi keeps gushing the way she has been, it's extremely likely. Josh better step up his game if he wants a shot with her in the end.