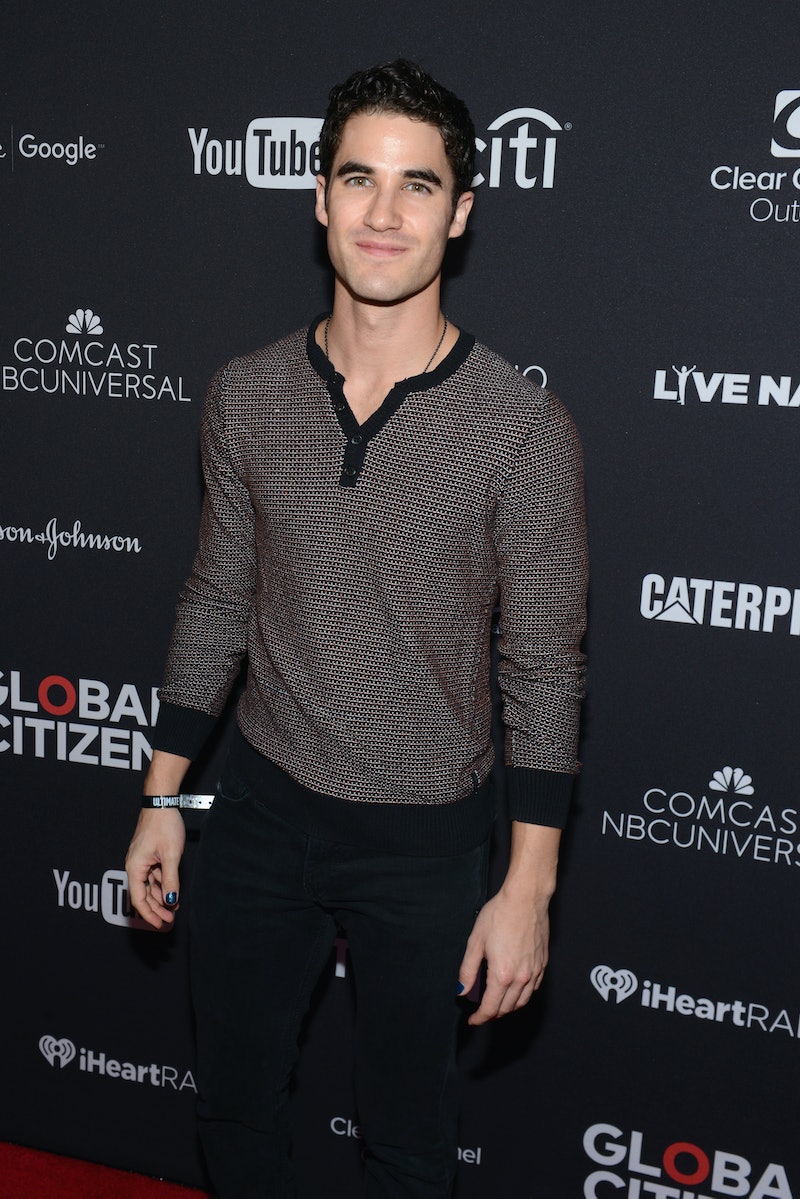 How's this for some Glee-ful news? Fans have known for months that The CW was planning a Flash and Supergirl musical crossover, which would feature a character known as The Music Meister as its villain. Speculation about who would play the melodious miscreant has been rife ever since, with fans championing everyone from Neil Patrick Harris to Jonathan Groff. But this Monday, the network finally announced who would be playing the symphonic scoundrel… and the casting couldn't be more perfect. According to TVLine, Darren Criss will play The Music Meister in The Flash and Supergirl crossover, which means we're in for an epic Glee reunion.

Almost two years after the Fox sing-sation aired its final episode, the Arrow-verse crossover will reunite the golden-throated Warbler with his fellow Glee stars Grant Gustin (who flirted with him as Sebastian Smythe) and Melissa Benoist (who duetted with him as Marley Rose). Hot off a stint as the title character in the Broadway revival of Hedwig And The Angry Inch, Criss definitely has the vocal chops needed to pull off this rhythmic reprobate. In fact, this casting decision is so genius, it's surprising that fans didn't all see it coming. But what exactly do we know about the choral criminal that The Man Formerly Known As Blaine Anderson will be playing? Who is The Music Meister?

Unlike most famous DC villains — the Joker, Lex Luthor, Darkseid — this tuneful terror didn't originate in the pages of the comic books. Rather, The Music Meister was an original creation for the animated TV series Batman: The Brave And The Bold, which ran for three seasons on Cartoon Network from 2008-2011. The dulcet devil made his debut in the Season 1 episode, "Mayhem Of The Music Meister!," in which he terrorized Batman, Black Canary, Green Arrow, and the rest of our heroes with his ability to control their minds through song.

The episode was a huge hit, earning the show an Emmy nomination for Music Composition, where it was honored alongside Flash Forward, Lost, Psych, and the winner 24. The operatic offender, who was voiced by Neil Patrick Harris (himself a fellow Glee alum in the Emmy-winning role of Bryan Ryan), proved so popular with audiences that he made one additional appearance, stopping by for a cameo in the series finale, "Mitefall!"

Of course, the euphonious evildoer wasn't just confined to the small screen. After his splashy introduction, The Music Meister made the leap to the Batman: The Brave And The Bold comic series inspired by the TV show, he could be heard on the soundtrack of the episode that Warner Bros. released, and he also became a playable character in the 2014 multi-platform video game Lego Batman 3: Beyond Gotham. And now lilting lowlife is returning to the small screen — this time in the flesh — to wreak havoc for Barry Allen and Kara Danvers.

While some fans will probably be disappointed that Harris isn't returning to reprise his role as The Music Meister, there's no doubt that Criss will be a perfect fit for the role: he's charming, he's talented, and he's got proven chemistry with both Gustin and Benoist. You can catch him in action as the harmonious heel when the highly-anticipated crossover event airs on Monday, Mar. 20 and Tuesday, Mar. 21.