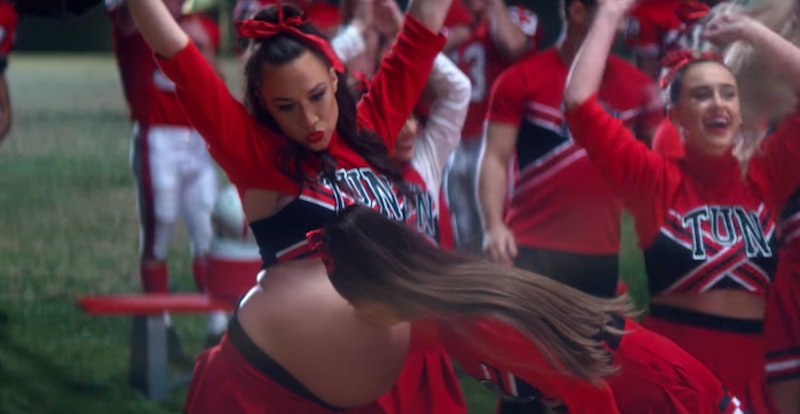 After weeks of anticipation, the "Thank U, Next" video has finally dropped. And, boy, what a video it is. In the clip, Ariana Grande and her friends recreate iconic moments from 13 Going On 30, Mean Girls, Bring It On, and Legally Blonde, and one friend in particular makes a splash. The pregnant woman in "Thank U, Next" is definitely a standout, mostly because it's not often that one sees a pregnant cheerleader dancing by the side of a football field. But, before you ask who she is, you really should be asking where you've seen her before, because Colleen Ballinger and Grande go way back.

Some of you might not recognize Colleen Ballinger actually playing herself. The actor is actually better known as Miranda Sings, her YouTube persona that launched her into stardom. Ballinger's Miranda Sings character was so popular, she booked a guest spot on Victorious, the Nickelodeon show Grande starred on before becoming an international pop superstar. Ballinger appeared in five episodes of the series way back in 2012, and it seems that the two have been friends for a long time.

In the music video, Ballinger, who is in her third trimester of pregnancy, appears in the Bring It On sequence as a member of Grande's version of the Rancho Carne Toros — their uniforms say TUN on them, "Thank U, Next." She dances alongside Grande and more of their friends, including Courtney Chipolone, Daniella Monet, and Alexa Luria as part of the Toros. And they later join with the Clovers — Nekai Johnson, Luz Remigio, and Patience Aquart — for a long kick line.

At the end of the video, she gets a nice kiss from Grande on her pregnant bell, giving the clip a sweet ending, and showing off their close bond.

This isn't the first time Ballinger and Grande have collaborated before. In fact, the two have made plenty of content together, most notably on Ballinger's own YouTube channel. In 2011, Ballinger shared a video celebrating Grande turning 18, and one for the singer's 20th birthday as well — that's right, their friendship has been YouTube-official for about a decade. And through the years, Ballinger has shared multiple vlogs of her doing fun things with the Grande family (like going to a haunted theme park with Frankie Grande). In fact, one such video actually dates all the way back to 2009, when Grande and Ballinger were just a couple of Broadway babies singing "Take Me Or Leave Me" from the musical Rent.

Ballinger touched on her relationship with Grande and the singer's family in a Q&A video uploaded in 2017. After a fan asked why she didn't hang out with the Grandes as much anymore, Ballinger responded, "I love the Grandes so much, and they will always be family to me no matter what happens." The reason for the lack of public hangouts, she said, was because of distance — with Grande on tour and Frankie living on the East Coast (Ballinger is based on the West Coast).

Ballinger and Grande are clearly sisters first, music video stars second, but it's a nice treat for fans to get to see them as both in "Thank U, Next."