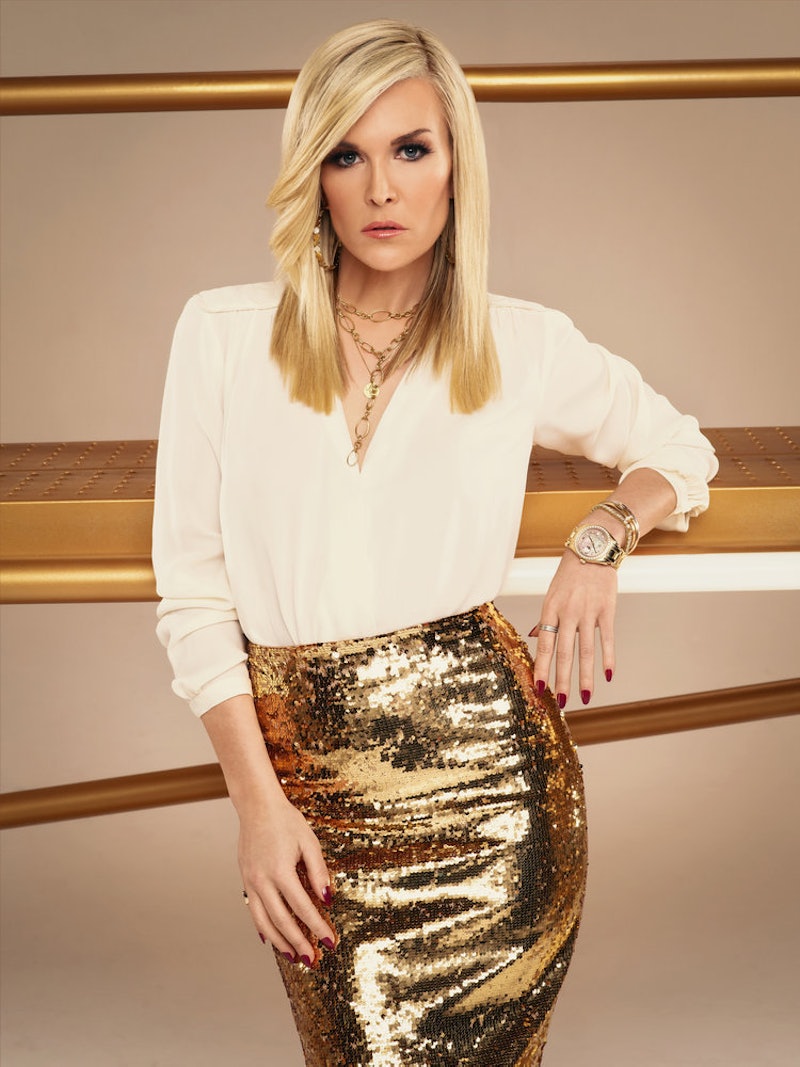 When Tinsley Mortimer joined Real Housewives of New York two seasons ago, she was single and ready to mingle. Former cast member Carole Radziwill hooked Tinsley up with Scott Kluth and this lead to an on-again-of-again relationship. Truthfully, it's tough to keep track of these two. So, who is Tinsley Mortimer dating in 2019? Are she and Scott still together? Is she single? Or is it just eternally unclear?

For now, it is unclear, as per usual. Tinsley hasn't said anything publicly about her romantic status, which makes sense since her relationship with Scott is her major storyline and Season 11 just started. She doesn't want to give away any spoilers. Nevertheless, there are reports that she is single once again. In a Feb. 19 article from Us Weekly, an "inside source" claimed that Tinsley "isn’t locked down at the moment." That same person told the magazine, "The breakup with Scott was heartbreaking for her."

Even so, this supposed insider shared, "All of Tinsley’s friends are trying to set her up with guys, but no one serious yet.” While the reality star is keeping her personal life private, a source told Page Six on March 11 that Tinsley was "spotted getting flirty with a male model," which really could mean anything. Vague, right?

Truthfully, Tinsley's romantic status is not super clear these days. However, Tinsley did post a solo photo in honor of Valentine's Day, just a month before before being spotted with the aforementioned "male model." This could really mean anything. She could be celebrating self love and there's absolutely nothing wrong with that. She could have just snapped a selfie while her date was in the rest room. Ultimately, the photo is not conclusive.

For the most part, Tinsley's love life is confusing. Even if she did give her fans an update, it is not likely that it would hold up for very long. She and Scott had (or have?) a very on-again-off-again relationship. As soon as news broke with them, it changed almost immediately after.

For instance, In June 2018 Us Weekly reported that Tinsley and Scott split up. Then, during a Watch What Happens Live With Andy Cohen episode that same week, Tinsley confirmed the breakup. She admitted, "Today is an odd day. The media is reporting that we did break up and it’s true. Then, Tinsley backtracked and said, "We are on a break right now. Look, it’s so hard to be in a relationship, particularly when we don’t live in the same town. He’s in Chicago."

Thankfully, Andy Cohen pushed for clarification and remarked, "You said you’re on a break.” Unfortunately, this got Tinsley all frazzled and she confessed, "Look, we’re broken up right now, but I’ll tell you this: we break up all the time. The media just doesn’t get a hold of it the way they did this time.” And interestingly enough, Tinsley posted photos from a European vacation with Scott in July 2018, just a month later.

The takeaway here is that you just never know what's going on with Tinsley and Scott. Realistically, even when you do know, there's bound to be brand new information a couple of weeks later. Either way, this RHONY star seems to be happy these days, so whatever she's doing is working.