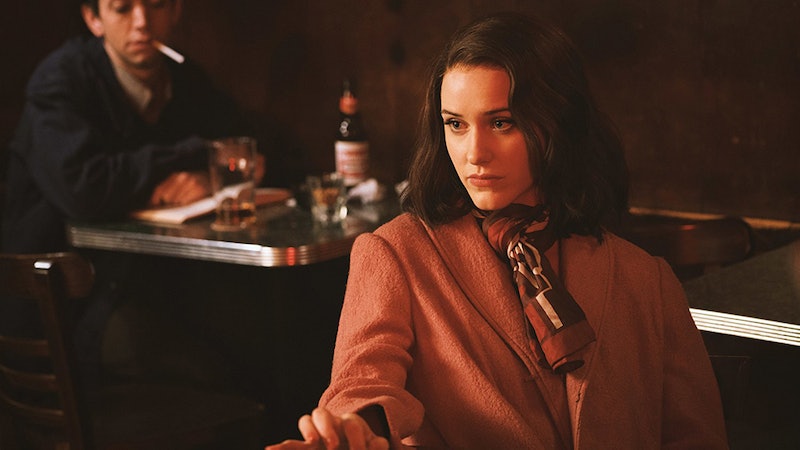 For those of you who haven’t seen Amazon’s newest streaming show, The Marvelous Mrs. Maisel — stop what you’re doing. (After you read this article, of course). Stop what you’re doing, find an Internet connection, and go watch the whole series. Any responsibilities you have aren’t as important, because this show is charming and lovely and wonderful and the best antidote to the bleak 24/7 news cycle 2017 hath wrought. But in watching, you may notice the third episode of the series has a special dedication — who is Tony Palladino, and why is The Marvelous Mrs. Maisel dedicating an episode to him? Well, his last name is a big hint.

The show, created by Amy Sherman-Palladino and Daniel Palladino, follows Miriam “Midge” Maisel, a married mother of two who, after her husband leaves her, decides to become a stand-up comic in New York’s Greenwich Village in 1958. Sherman-Palladino and Palladino also created Gilmore Girls, so if you notice the similarities in snappy dialog and pop culture references, that’s by design. And, as the last names connote, there's a family connection to Tony Palladino, the dedicatee in “Because You Left."

According to the New York Times, Tony Palladino was a Hollywood staple, responsible for creating “one of the most iconic typographic titles in publishing and film history.” It's not immediately clear how he is related to the Palladinos — the NYT article claimed that the 84-year-old had a brother named Daniel, though that would be a pretty big age difference to be the same Daniel Palladino who worked on Maisel. (The Palladinos declined to comment on the choice of dedication when asked by Bustle.)

In any case, an innovative graphic designer in his own right, Tony Palladino was perhaps best known as the man behind the crooked, off-kilter design for Psycho. That font makes that story’s branding, doesn’t it? According to the New York Times, “Mr. Palladino’s conception for Psycho originally appeared on the book jacket for Robert Bloch’s 1959 novel of that title, published by Simon & Schuster. For his 1960 film adaptation, Alfred Hitchcock purchased the rights to the lettering for its promotion, which influenced the opening credit sequence created by Saul Bass.” Palladino passed away from complications from pneumonia in 2014, and I’d like to think that he would have liked the jazzy title cards from The Marvelous Mrs. Maisel, as well as the show’s setting (Tony Palladino was born and died in Manhattan, making him a true New Yorker.)

The inspiration for The Marvelous Mrs. Maisel takes into account Sherman-Palladino’s own bloodline, too. In an interview with W, Sherman-Palladino spoke of her upbringing in comedy and why the era was important:

“My dad was a standup comic, so I was raised around comics and stories of Greenwich Village comedy clubs and basket-houses, and the Catskills and Vegas. I knew I wanted to do another really strong female piece… I met with the Amazon guys and I said, ‘What about doing a show about a 1950s housewife who becomes a stand-up comic in the Greenwich Village basket house scene?’ It was a pivotal time in comedy because comedy was starting to change from ‘take my wife, please’ to Lenny Bruce, stream of consciousness, political humor, a little bit more truth telling, which is what I wanted Midge to do. It felt like by plopping her right there, you had the beauty of the cars and the clothes and the coiffed, perfect housewife, and yet downtown there was this movement and this energy of pushing into the future. I thought that would be a perfect place to kind of dump a girl.”

And dump Midge they do. In fact, the audition for the part of Midge Maisel involved memorizing the first stand-up scene in the pilot and heckling the reader. Of the experience, Daniel Palladino told the Hollywood Reporter, “Every actress came in and every actress was off-book. They had memorized the scene and they came in to do the stand-up and it was me yelling, like the audience would, back to them and kind of applauding and trying to give them energy. It was really tough. It was terrible.”

What’s not terrible is the show in general, because those casting efforts paid off. The Marvelous Mrs. Maisel is fabulous, and it’s sweet that Sherman-Palladino and Palladino used their work to pay homage to another standout creative in Tony Palladino.