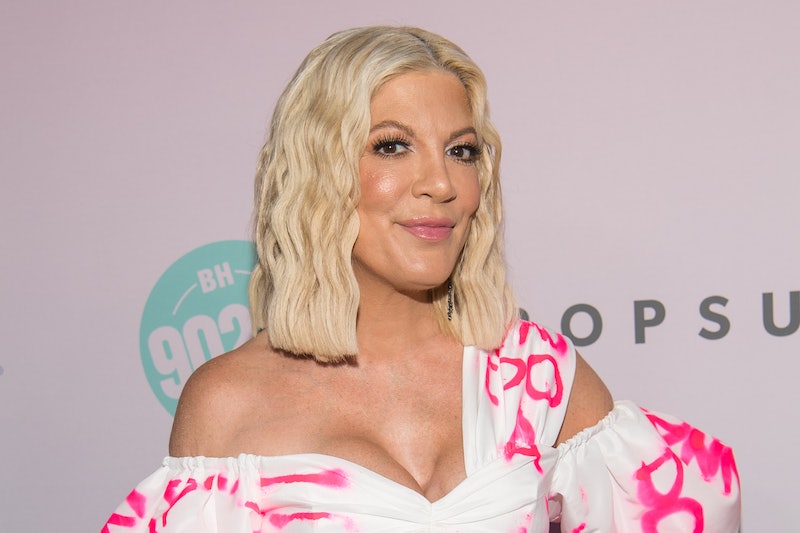 It’s been nearly 20 years since Beverly Hills, 90210 went off the air, putting the characters of Donna Martin, Kelly Taylor, Brandon Walsh, Dylan McKay, and more in the history books. It was time for the characters to grow up, and it was time for the actors to grow up. And they did — they’re married with children, older, wrinklier, and wiser. Tori Spelling has been a tabloid fixture since her show ended, and it’s nice to see her settled down as the 90210 reboot premieres. Given that the revival is a show within a show, it will be good to know who is Tori Spelling married to in 2019. On the series, she has a fictional husband — but who's her partner IRL?

Right now, Spelling is married to Dean McDermott and the two have been living in wedded bliss since 2006 — which is a really, really long time when it comes to Hollywood relationships. According to Entertainment Tonight, they have five children — 12-year-old Liam; 11-year-old Stella; 7-year-old Hatti; 6-year-old Finn, and 2-year-old Beau. He’s completely ride or die for his family, defending them, per Entertainment Tonight, against body-shaming trolls and people who claim that Spelling wearing a bikini on Instagram is her "trying too hard." (What does that even mean?)

According to his IMDB page, McDermott is also an actor who has starred in shows like Slasher, CSI: Crime Scene Investigation, Without A Trace, NCIS, Tilt, and more. Oh, and don’t forget movies like The Last Sharknado: It’s About Time (a real doozy) and Santa Baby 2: Christmas Maybe.

Spelling has had her own movies and shows since becoming a mother, including a reality series called Tori & Dean: Home Sweet Hollywood. But the reboot of BH90210 has been a longtime coming. According to an interview with TV Insider, Spelling said that it was her and Jennie Garth's idea to get the gang back together for this very meta rehashing of Beverly Hills, 90120. "[Beverly Hills] 90210 is kind of in your back pocket when you have that success, so we were thinking of other ideas we wanted to do together and we wanted to do comedy," Spelling said. "Then we were like, 'What if it’s something around 90210 but not a reboot?' We came up with something that had to do with our lives."

For now, Spelling and McDermott are focusing on BH90210 but Spelling has other TV plans, too. Per CNN, she recently told Jenny McCarthy on The Jenny McCarthy Show that she really, really wants to be on Real Housewives Of Beverly Hills but Bravo has never asked. "It actually makes me really sad," she said, adding that drama follows her "everywhere."

There is an opening now that Lisa Vanderpump is gone, and Denise Richards, who is a new Housewife, is starring on BH90210, so there could be a way to make it happen if she knows how to pull the right strings with Andy Cohen. There will be time for all of that, of course. For now, Spelling and McDermott can relax and live their best family life with their kids.