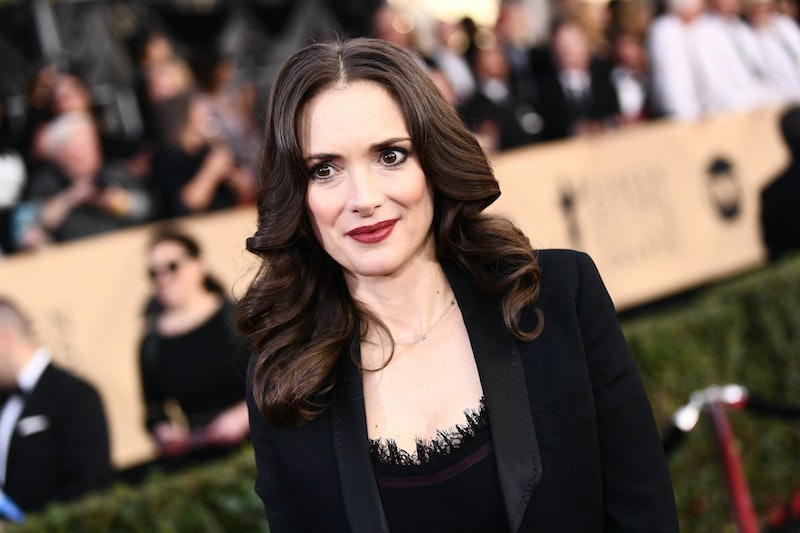 With Stranger Things 3 set to return to Netflix on July 4, fans will be graced with more scenes with Joyce and Hopper — known to 'shippers as Jopper. In the first two seasons, viewers fell in love with Joyce Byers and Jim Hopper’s undeniable dynamic as the concerned mother and police chief traversed the Upside Down to bring Will home once and for all. While Joyce Byers has dealt with her fair share of romance woes, fans can find solace in the fact that her IRL counterpart has been in a committed relationship for years now. Who is Winona Ryder dating in 2019? Well, her longtime beau seems like the polar opposite of Jim Hopper.

According to the Daily Mail, Ryder has been dating Scott Mackinlay Hahn since 2011. The two keep a notoriously low profile, but Mackinlay Hahn has been by his longtime love’s side at red carpet events several times. In 2017, for example, he accompanied Ryder to the Netflix Screen Actors Guild Nominee Toast in Los Angeles to celebrate her work in her hit Netflix series Stranger Things.

So, who is Mackinlay Hahn? Well, unlike his famous counterpart, he isn’t on TV or film. According to the Daily Mail, Mackinlay Hahn is an American fashion designer who specializes in sustainable, eco-friendly fashion. More so, he's the co-founder of sustainable clothing brands such as Loomslate, Rogan, and Egan. In a 2012 interview with TIME, the fashion designer spoke at length about how Loomslate balanced sustainability with design. “It's a constant, fine line to walk, but we air toward the design narrative because that's where people's attention is focused,” he said. “But green fashion and the conversation is moving quickly from romantic and idealistic to a very technical and measured practice.”

While the two have been dating for eight years now (which is, like, a very long time in Hollywood years), wedding bells may not necessarily be on the horizon any time soon. The actress has been vocal about her skepticism of marriage in the past. In a 2016 interview with Net-A-Porter’s The Edit, Ryder opened up about her complex feelings about marriage, despite the fact that she’s a “serial monogamist.” She told the publication, “I’m a serial monogamist. I was single for a while and dating and… I just didn’t know how to do it! I’ve always been like that." Ryder added of the high standards imposed by her parents’ marriage:

“But marriage? I don’t know. I’d rather never have been married than been divorced a few times. Not that there’s anything wrong with divorce, but I don’t think I could do it if that was a possibility. When your parents are madly in love for 45 years, your standards are really high. But I’ve been happily with someone for quite a while now.”

Her "happily with someone" comment is, of course, a likely nod to her eco-friendly beau. Given all the romance woes Joyce has had to contend with in Stranger Things, it's reassuring to hear that Winona is doing just fine.