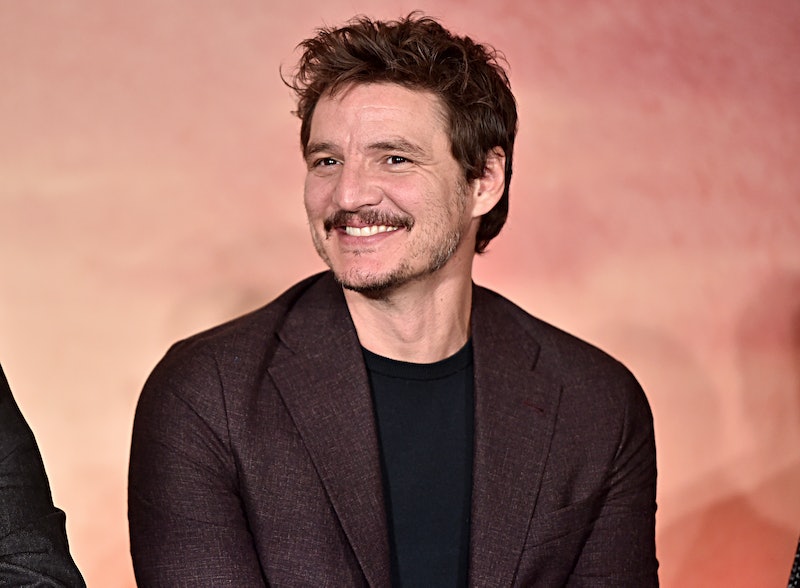 For those wondering who Pedro Pascal is playing in the Wonder Woman sequel, director Patty Jenkins has finally given fans an answer. Unfortunately, though, it's one that might just lead to more questions. The most important one being, who is Maxwell Lord in Wonder Woman 1984?

Yes, Pascal is playing Maxwell Lord in Wonder Woman 1984, hitting theaters June 5, 2020. Jenkins broke the news with a tweet on Thursday, Oct. 24, that was short, but sweet. "Well hello... Max," she wrote alongside a comic book illustration of the character looking dapper in a red pinstripe suit. The most revealing detail of her tweet, though, was who she tagged: the movie, Wonder Woman herself, Gal Gadot, and Pascal.

For many DC fans this wasn't all that surprising. They had guessed that Pascal would be playing Max Lord last year, after Jenkins tweeted a photo of the actor in character looking very '80s businessman. Not to mention, a recent press release confirming that Wonder Woman 1984's official trailer would debut in December at Comic Con Experience in São Paulo already let the cat out of the bag.

But, no matter how fans heard about Pascal's role, it's still an exciting new piece of information. In the DC Wonder Woman-verse Maxwell Lord is a sleazy businessman who was first introduced in 1987, that has since drawn comparisons to President Donald Trump during his Eighties heyday, according to io9.

Back then Max Lord didn't have any super powers, but later would become telepathic, using his skills to force others to do his bidding for him. In the 2005 issue Wonder Woman Vol. 2 #219, Lord uses his mind control powers to convince Superman that Batman, Wonder Woman, and the rest of the Justice League are his enemies, according to IGN. No surprise, this caused some problems between him and Wonder Woman.

But, Max Lord has been a problem for many in the DC Universe. More recently, Lord popped up on The CW's Supergirl as the CEO and founder of Lord Technologies. "He’s kind of anti-superhero," Peter Facinelli said back in 2015 of his Supergirl character. "I think he’s fascinated by superheroes in the sense that he wants to be able to harness that power for humanity in some way."

As Entertainment Weekly pointed out, in the comics, Max Lord's disdain for superheroes started young. When he was a kid, he found his father dead of an apparent suicide. But this moment led him to distrust all non-humans, deciding that superheroes should be exterminated, and he could be the guy to do it.

For now, it's unclear if Pascal's 1984 version of Max Lord sees himself as the hero the world needs, or just another successful businessman.