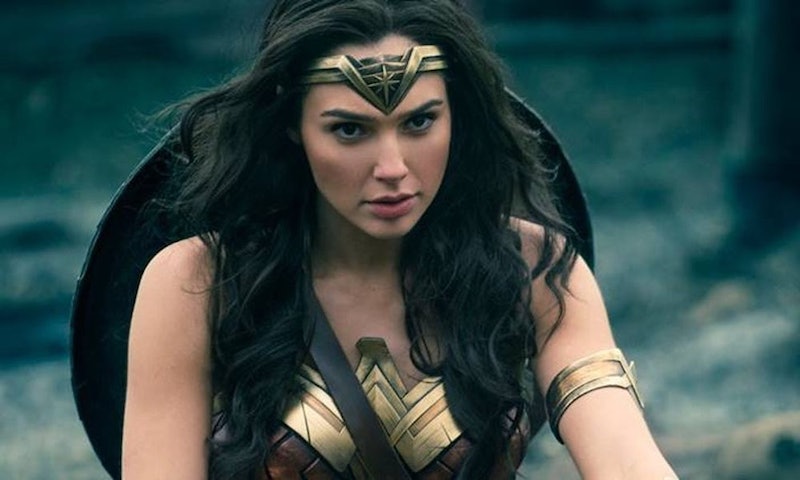 Stay golden, Wonder Woman. The new Wonder Woman 1984 poster, which director Patty Jenkins shared on Twitter, has Diana Prince showing off a brand new look. Specifically, a shiny new costume that has Twitter talking about how it connects to Wonder Woman's past and what it could mean for her future. Let's just say, D.C. comic book fans should be excited about what's coming next.

On Wednesday (June 5), Jenkins tweeted that unfortunately the Wonder Woman sequel would not be heading to San Diego Comic-Con this summer. "By now you’ve heard: WB isn’t going to Hall H this year," she wrote. "We’re so sad to miss you there! And waiting until Dec. to start our official #WW84 campaign in full-- But the truth is… we can just… barely… wait…"

Jenkins couldn't even finish this tweet without sharing a new neon poster for Wonder Woman 1984, in theaters a year from now, June 5, 2020. The totally '80s poster also offers a closer look at Wonder Woman's 1984 armor, which is not the famous red, white, and blue she's become known for, but gold, gold, and more gold. While this look may be new to moviegoers, comic book fans think it looks a lot like the armor she wears in the 1996 Wonder Woman comic series Kingdom Come.

According to IndieWire, Wonder Woman's gold look in Kingdom Come was often referred to as her "Golden Eagle Armor" and it does share some similarities with this newly revealed look. If Diana is wearing the Golden Eagle Armor from the comics this could mean she'll have the ability to fly like a bird. Take that Superman.

The golden armor would also make her impenetrable. That means she can't be hurt by bullets, explosions or whatever else Wonder Woman 1984 villain Cheetah, played by Kristen Wiig, throws at her.

Of course, Jenkins isn't saying whether or not Wonder Woman's new look was inspired by Kingdom Come, but Jill Pantozzi, io9's deputy editor, thought Wonder Woman looked a lot like the machine on the classic poster for the science fiction classic Metropolis.

Entertainment Weekly's Christian Holub also got Thor: Ragnarok vibes from the poster, but was more excited to see her in gold. "Always love seeing Wonder Woman pull out her golden eagle armor in the comics," Holub wrote, "so I'm excited to see it on screen!"

Lainey Gossip's film critic Sarah Marrs was just happy to see Wonder Woman in battle mode. "I love that Patty Jenkins assumes full control of Wonder Woman and immediately turns up the color and gets rid of the miniskirt," Marrs wrote.

As of now, not much is known about Wonder Woman 1984, which may or may not include time travel since somehow Steve Trevor is alive. Oh, and 70 years after the original he's wearing a tracksuit because that's who he is now. As for who Diana Prince will be in this sequel, it's clear from this new look that she's someone who's ready to go to war — and she's going to look good doing it.