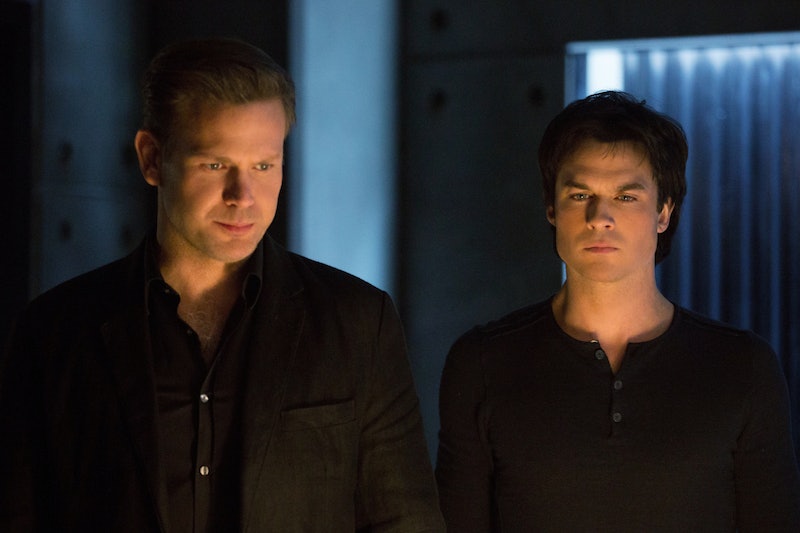 As if being a 100+ year old killer vampire with a body count large enough to fill the Titanic didn't cause Stefan enough guilt, now that he's been cured, he can barely look at himself. Stefan dealt with the consequences of his new human-status on The Vampire Diaries' "What Are You?" this week, which meant suffering through a lot of guilt, and even more attitude. As if all that wasn't enough, just when he seemed ready to face up to what he's done, he got kidnapped. So, who kidnapped Stefan on The Vampire Diaries? Well, remember that body count I mentioned? That doesn't come without a whole lot of enemies.

After nearly dying himself thanks to a convenient stab wound and a threat by Cade, Stefan decided it was time to start trying to make up for all the awful things he's done. His first stop: Bonnie, who, let's face it, would probably have slammed the door in his face. That is, if he had made it to the front door in the first place. Before he could even knock, a hooded figure snuck up behind him and got him with a taser. Now that he's a human, that's all it took to take him down, and it looks like Stefan was kidnapped. The question is, who did it?

Earlier in the episode, Stefan was arrested and fingerprinted, which led to him being connected to a ton of murders in the past few months. However, Caroline compelled everyone at the police station to let him go and forget about him, so I'm thinking his kidnapping has nothing to do with his evil deeds, no matter how evil or how many there are. So, who would have a need to kidnap Stefan? My guess is it's someone who will want something from Damon. As Cade proved in the episode, threatening Stefan's life is a great way to get Damon to do whatever you want. Since Cade could have easily kidnapped Stefan without a taser, I'm saying it's not him. That leaves Bonnie, Matt, or Dorian, the intern at the Armory. Bonnie wouldn't have needed to taser Stefan to get him in her custody, and Matt probably wouldn't need to either. Add in the fact that Dorian was acting super sketchy throughout the episode, and I think we've got ourselves a winner. As for what, exactly, Dorian might want with Stefan, I have no clue, but for now he's the prime suspect.

Stefan is definitely going to be in trouble when he wakes up. I guess you can take the humanity out of the vampire, but you can't take the vampire deeds out of the man.