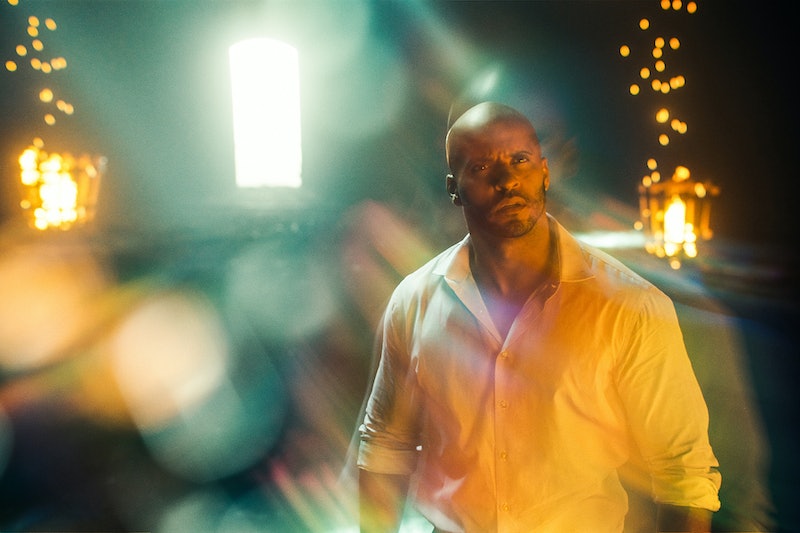 After a long hiatus and an overhaul in the creative team behind the series, American Gods is finally back. However, the Season 2 premiere doesn't ease viewers back into the series, starting with the image of a New God-carrying limo mowing down an unsuspecting golfer and ending with Shadow getting kidnapped. With this moment, American Gods lets viewers know that a war is, in fact, on its way and there is no time to get comfortable. However, Shadow's abduction suggests a new force has entered the game, because he isn't just taken away — he's pulled upward into a beam of light as though he's being stolen from aliens. While American Gods is a fairly fantastical series, it's hard to believe extraterrestrials would be mingling in the affairs of Gods.

The abduction comes on the heels of a shootout at a God-filled diner outside of the House On The Rock. A sniper armed with latin-inscribed bullets manages to take out various patrons in an incredibly bloody manner, including Zorya Vechernyaya. Shadow runs around the incapacitate the shooter before the mysterious beam of light takes him away. While it's likely someone working for the New Gods, it's possible that this abduction will put Shadow face to face with either the New Gods themselves or one of their many lackeys.

Now that Mr. World has started attempting to manipulate events in his own favor, it's doubtful that he'd have the time to sit down with Shadow and try and convince him, once again, that his side is the superior one. After some excursions from the traditional narrative path of the novel that the show is based one, the show seems to be back on track now that they've reached the House on the Rock, suggesting that Shadow is going to come face to face with some of the New Gods' servants. In the book, these servants are Mr. Wood and Mr. Stone who pull a good cop/bad cop routine to try and get information from Shadow regarding the actions and plans of the Old Gods.

Mr. Wood and Stone aren't long for the world in the novel, however, and the show may use this opportunity to skip two minor characters and introduce a more important supporting character from the American Gods novel — Mr. Town. I

t was reported in mid-2018 by Entertainment Weekly that Dean Winters would be joining the show as Mr. Town, who in the novel plays a crucial role as a servant for the New Gods, doing everything from running errands to assisting in attacks in the war between the Gods. Trailers for Season 2 show Winters as lackey, suggesting that he'll be showing up in the season and will hopefully be able to explain how someone managed to abduct Shadow through some kind of light beam, considering how excessive that is compared to his kidnapping at the equal point in the book where someone just throws a bag over his head. It's all a bit much, but if there is one element that defines Gods, New and Old, it's a love of extravagance, even in war.