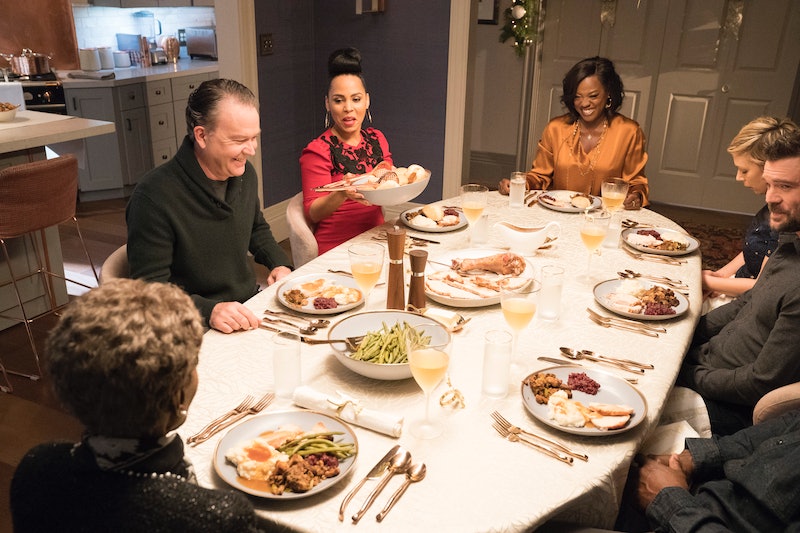 The season finale of How to Get Away with Murder is fast approaching, and it looks like there's still plenty of drama in store. Fans still don't know who killed Nate Sr. on HTGAWM, although it's looking pretty unlikely that the late D.A. Miller was involved. And while Annalise seems determined to blame things on Governor Birkhead, it looks like she might not be responsible, either. In fact, Birkhead says the responsibility for Nate's dad's death lies with Emmett Crawford, Annalise and Tegan's boss at Caplan & Gold.

Emmett's been becoming a bigger and bigger player in the show lately. But if he's responsible for Nate Sr.'s death, that would definitely be a surprising twist. He's always seemed to be on Annalise's side, with both Tegan and Annalise's mother, Ophelia, implying that he might even be interested in her. So why would he orchestrate a hit on Nate's dad, just before his transfer and release?

Some fans seem to think this could all be Emmett's way to get Annalise to go back to Caplan & Gold. Although, really, would a murder be necessary for that? Emmett may be a somewhat soulless lawyer, but that doesn't mean he's just going around having innocent men killed.

Then again, it's possible that Governor Birkhead isn't telling Annalise the truth. She hasn't been around much this season, and she hasn't been on Annalise's side in the past. Placing the blame on Emmett could be her way of introducing a new suspect (Annalise's trusted courtroom tactic), so that the FBI doesn't end up coming after her.

And if Emmett is responsible, how is Birkhead the only one who knows about it? And why is the governor telling Annalise this information, instead of taking it straight to the FBI to save her own reputation? The governor's name has been linked to Miller's death in the news at this point, and even Miller's mom seems to know what's going on. It's hard to see why Birkhead would let all of the negative reports continue, if she had a way to stop them.

Regardless of whether Emmett is innocent, though, Birkhead's claim should be enough to stop the apparently brewing sexual tension between Emmett and Annalise, at least at least for now. Honestly, this is why Annalise told her mom that she doesn't want to let more men into her life. Emmett could be on the fast track to being as much of a bad guy as Sam was.

And who knows — maybe Annalise will take up her mom's offer and marry Nate, so that they don't have to testify against one another. That was one heck of a theory for Ophelia to come up with, and it actually might work.

If Emmett did have something to do with Nate Sr.'s death, though, Tegan is sure to side with Annalise. She played FBI Agent Telesco in order to give Annalise more time to come up with a plan, so she's definitely on Annalise's side. Whether they're going up against Birkhead or even their boss, these two are an unstoppable pair — and that's the kind of solidarity Annalise needs right now.