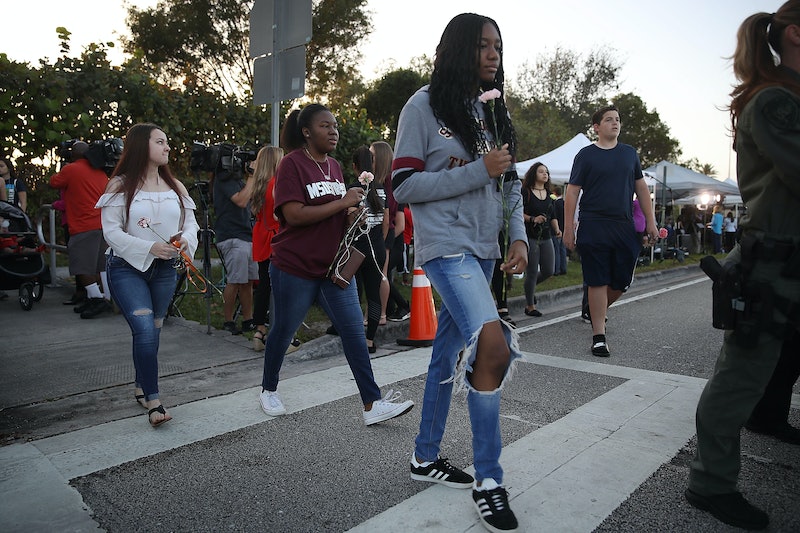 The Marjory Stoneman Douglas High School students who have placed themselves right at the forefront of the gun violence prevention movement have taken a lot of work onto their shoulders, but they're not working alone in all cases. Instead of organizing the National School Walkout themselves, a familiar organization has stepped up to the plate on this one: EMPOWER, the youth wing of the Women's March.

The National School Walkout will take place on March 14, one month after the shooting in Parkland and 10 days before the Parkland students' event, the March For Our Lives, is scheduled. The goal of the March For Our Lives, according to their website, is to "demand that [students'] lives and safety become a priority and that we end gun violence and mass shootings in our schools today." The walkout has essentially the same goal, but they're going about it using a different method.

Students (both in high school and college) will take part in the protest, and the fact that it's a school walkout, hands the focus entirely back to students across the country who want to add their voices to the movement to prevent gun violence.

According to the website of the National School Walkout, the organizers are calling for high school and university students, legislators, and anyone else interested to walk out of their classes or workplaces for 17 minutes — to honor each of the lives lost in Parkland — at 10 a.m. on March 14. EMPOWER is offering a toolkit for potential walkout organizers, which includes information on how to effectively organize an event like this.

The advice on the toolkit starts with giving instructions for simple logistic necessities, like speaking to an administrator about the walkout and spreading the word on the ground and on social media. They also leave organizers a lot of space to, as they say, make the walkout their own, whether that means making it a lie-in rather than a walk out or incorporating a voter registration drive for seniors during the walkout.

While this is a slightly different strategy than the March For Our Lives, it's connected in that it keeps the conversation about gun violence prevention going. It also, like the March, is meant to specifically reach the legislators who could actually change gun control policy in this country.

While the Stoneman Douglas students have been picking up all of their organizational skills pretty much on the fly, National School Walkout comes with the backing of the Women's March. This means that these organizers have the same, compelling goals as the Stoneman Douglas students who have captivated the nation, but they've got a whole lot more organizing power behind them.

EMPOWER has partnered with other social justice organizations across the country, and they're adding more events by the day. Currently, there are over 2,500 walkouts planned, according to the website, but if you're from an area where there isn't one yet, just remember that EMPOWER wants to make it has easy as possible for you to organize one yourself.

There are questions surrounding a school walkout that don't come up about a weekend event like the March For Our Lives, like about students' rights to leave class to protest or not. The answer all boils down to the First Amendment, which guarantees that anyone can use their speech to protest any aspect of the government.

Schools are, however, allowed to punish students for missing class just as they would in other case unrelated to protest — but in the interest of promoting civic engagement, most schools where a walkout has been organized have said they will likely not punish their students.