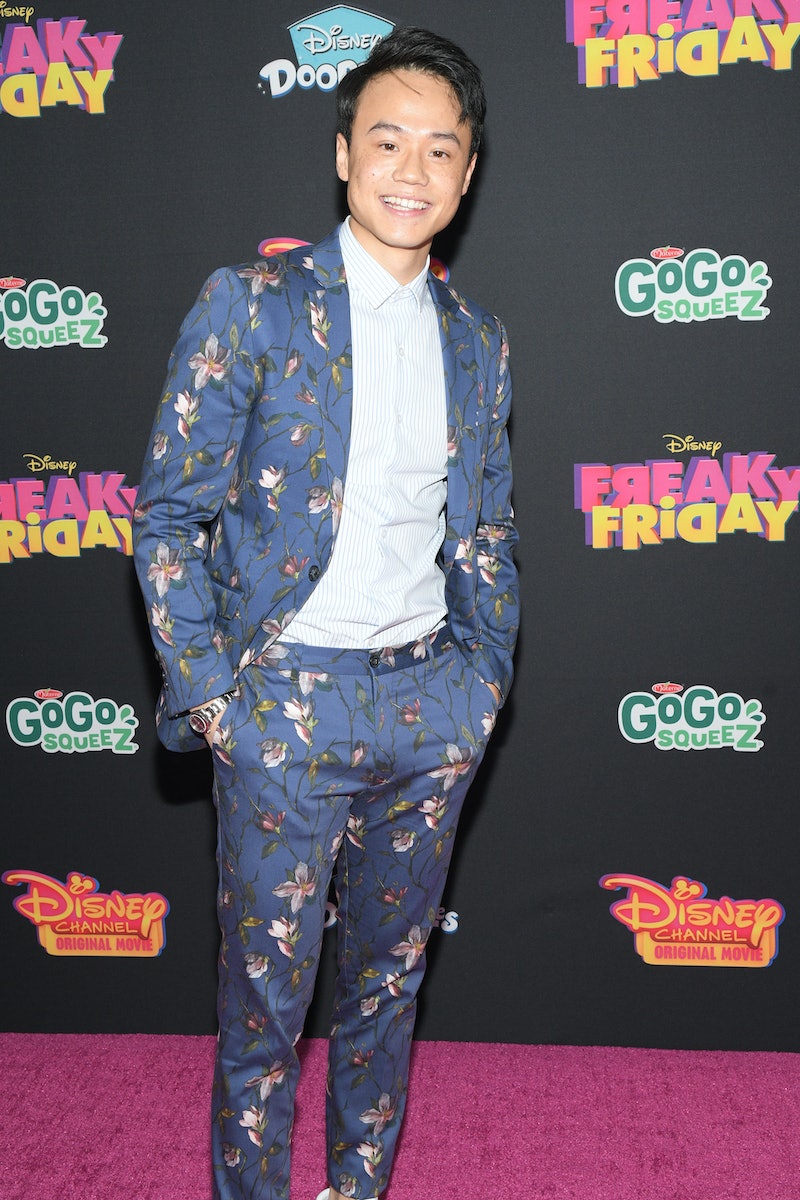 You know the story. A mother and her daughter can't seem to get along, until a magical spell forces the two to walk a mile in each other's shoes... literally. Disney Channel's new original movie Freaky Friday is another remake of the Lindsay Lohan/Jamie Lee Curtis classic, which itself is a remake of the 1976 original starring Jodie Foster, where a mother and daughter swap bodies and lives until they can learn to have empathy for one another. A key part of the musical's plot will also focus on both mother Katherine and daughter Ellie's attempts to navigate Ellie's high school crush, Adam. Ricky He plays Adam in the new Freaky Friday, and here's why the new Disney Channel romantic lead should be on your radar.

The fact that he was cast as a romantic lead might not be a surprise to anyone watching, yet it was certainly a surprise for the young actor who managed to snag the role. In an interview with NBC News, He revealed that the he had initially auditioned not for Adam, but for Karl, Ellie's wacky best friend. “I went in and read for Karl and I thought I did a pretty good job,” He told NBC. “But the issue when you see the movie is you know how unbelievably funny Isaiah [Lehtinen] is and how perfect he is for that role.”

But just because he didn't land the role of Karl doesn't mean He didn't make an impression on the producers. Executive producer Susan Cartsonis told NBC, she saw He as “leading man material” and asked him to read for Adam instead. “I’m in my car, flipping through my emails and reading the break down of what kind of character he is, only to find out that he is the romantic lead. I was ecstatic,” He told NBC. “Essentially, I was this random Chinese Canadian kid from Vancouver, and they sent down to Los Angeles to do a screen test with the star, Cozi Zuehlsdorff,” He told the Center for Asian American Media (CAAM) of the experience. “Just to be flown down there was beyond my imagination that I couldn’t have been more grateful for that experience alone. So when I heard that I got the role, it was incredible.”

He's casting comes at a time when Disney Channel, along of with other major networks and film production companies, are seeking to diversify their projects, and are working to redefine the archetypical "lead role", which is usually white, male, and straight. He, who is Asian-Canadian, does not neatly fit into that problematic archetype.

“Adam, at the end of the day, wasn't written as an Asian character or a Hispanic character or a white character or a black character," He told NBC News of why he was excited to play Adam. "He's just a kid that goes to a high school and I think that that's very honest to kids that go to high school because you see people of all diverse backgrounds, and it's a realistic representation of our world."

In addition to playing Adam in Freaky Friday, He is also currently appearing as Tyler Egret on NBC's comedy series Trial & Error. But though his career is now on the rise, it wasn't easy getting here. He, who grew up in Vancouver, told CAAM that he had initially been reluctant to pursue his dreams of becoming an actor because he didn't see Asian men being widely casted in movies and television when he was growing up.

“I was like, ‘Let’s be honest.’ This acting thing is fun, but it’s a high school thing,” He told CAAM. “Sure, I’m doing high school plays, but who’s going to cast an Asian person in a movie? There’s no future there.” But, after completing three years of college at the University of British Columbia, He made the bold choice to drop out of school to follow his dreams, to the chagrin of his parents.

“I'd be lying if I said that when I told them, 'Hey mom and dad, I dropped out of college,’ they said, 'Yeah, you go out and do that, man!' That's not real, but they have been very supportive in the decisions I'm making,” He said in the NBC interview. “I think, similar to Freaky Friday, we've come to learn about accepting one another and having a genuine understanding for each other.”

With his new role in Freaky Friday, Ricky He is one step closer to making all those sacrifices worthwhile.