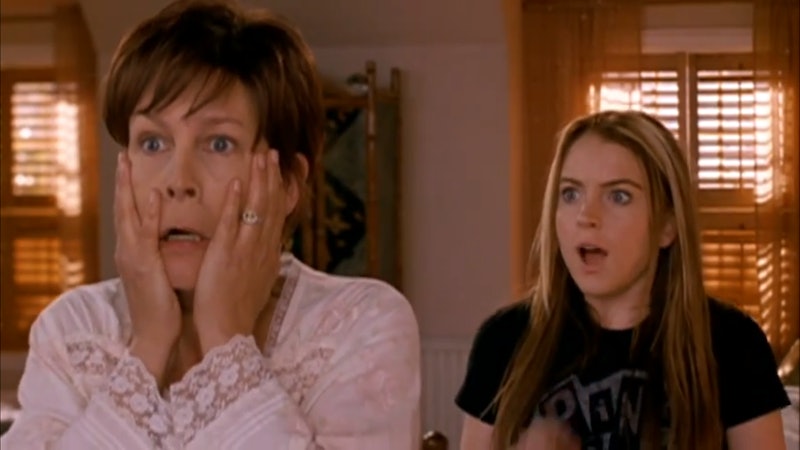 If your life is sorely in need of some body-swap fun, then listen up. On Friday, Entertainment Weekly reported that the Disney Channel is adapting Freaky Friday as a musical for TV. The news comes just one day after the network announced plans to remake Hocus Pocus with an all new cast. There's no doubt about it: the channel's latest crop of DCOMs is being powered by some serious nostalgia fuel, and it feels so good. The return of Freaky Friday also adds to another trend. Even though she's been out of the spotlight for some time now, Lindsay Lohan's classics are making major comebacks. First there was the Mean Girls musical, then the Life-Size 2 announcement, and now another round of Freaky Friday. Can someone get Lohan on board one of these projects already?

While you wait for Lohan to make a comeback like her movies, feel free to bask in the joy of knowing a musical Freaky Friday exists. The musical began running in 2016, and it features songs from Tony and Pulitzer Prize-winning composers Tom Kitt and Brian Yorkey. According to Playbill, many of the people who made the stage play a success will be working on the TV movie too. Even Heidi Blickenstaff, the actor who originated the role of Katherine for the stage, is ready to step back into the shoes of the frazzled mom who swaps bodies with her daughter.

Blickenstaff will be joined by Dolphin Tale's Cozi Zuehlsdorff, who is assuming the role of the daughter, played by Lohan in the 2003 film and by Jodie Foster in the 1976 version. According to EW, the rest of the cast will be rounded out by Ricky He, Alex Désert, Jason Maybaum, Kahyun Kim, Dara R. Moss, Jennifer LaPorte, Isaiah Lehtinen, and Sarah Willey.

Even though there have been four screen adaptations of Freaky Friday since the classic book was released in 1972, for many millennials, the 2003 film starring Lohan and Jamie Lee Curtis is the definitive version. The two actors had perfect chemistry as the mom and daughter duo in need of a crash course in understanding one another. That also happens to be the version that gave the world the amazing line, "I'm like the Cryptkeeper!"

Because the '03 movie is so iconic to its fans, the idea of embracing another version could be challenging. But, you guys, this version has singing and dancing. Almost everything can be improved with music, even a masterpiece like Freaky Friday. It helps that the Disney Channel isn't starting from scratch. They have all of the key people who made the stage play work on board for the TV movie, so there's no doubt that the story is in good hands.

Besides, Freaky Friday is timeless. That's just a fact at this point. Parents and teens will always have trouble relating to one another, and there's nothing like a good old-fashioned body-swap comedy to bring everyone closer together.

Adding music to the mix only makes sense. After all, Lohan's character Anna was passionate about her band, and the 2003 film had more than one memorable musical moment. Turning Freaky Friday into a musical for the stage was ingenious when you think about it, and translating the songs and story into a DCOM could be legendary.

There's no doubt that Lohan and Curtis will be missed, but this is one story that deserves to be remade for every generation. And the Disney Channel might just be on to something by adding a dash of musical cool cred to the latest adaptation of Freaky Friday.