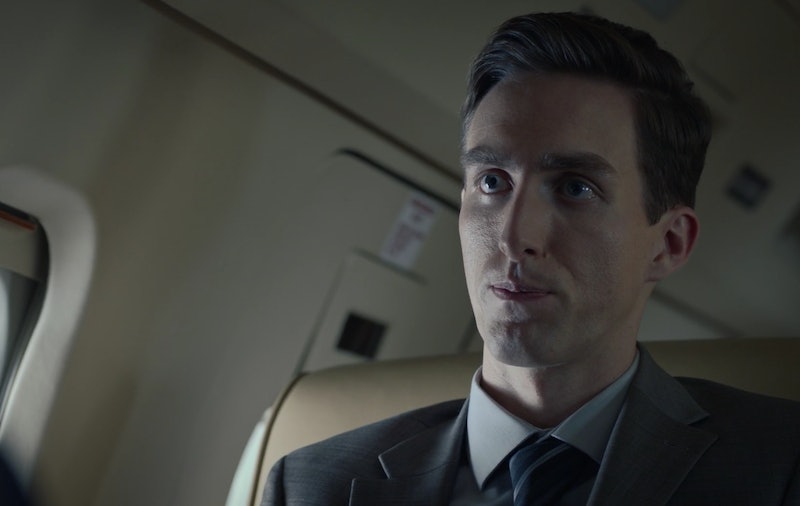 Agent Petey is also responsible for the HBO website Peteypedia, which provides plenty of Easter Eggs that aren't explicitly revealed in the series. And while it's unclear what his role in Watchmen will be moving forward, audiences likely haven't seen the last of him. After all, he and Agent Blake totally did it at the end of Episode 3, much to her chagrin. And since he's such a fanboy — sorry, historian — he's not going to give up an opportunity to work alongside Silk Spectre that easily.

As for Dustin Ingram, the actor behind Agent Petey, here are a few key things to know about him headed into Episode 4 on Sunday.

You May Have Seen Him Before

In addition to his role in Watchmen, Ingram has played characters like Hyman Cooper in Syfy's The Magicians and Alex Wood on Good Trouble, among others. He's also set to play a character named Tallman in the upcoming series Utopia, which is being adapted by Gillian Flynn. As Ingram wrote on Instagram about the show, "[Utopia is] creepy, weird, exciting, twisted, and super unique. Apologies to my mom and family in advance."

He's Close with His Parents

Not only did Ingram bring his parents to the Watchmen premiere, but he often posts Instagram posts with his family. "My mom is an actual unicorn because there is no way someone as magical and special as her could possibly exist," he wrote on Mother's Day.

Everyone's got to start somewhere, and for the Watchmen actor, it was playing the titular character in what looks like a local production of Oliver Twist.

In addition to Dungeons & Dragons, Ingram also plays other tabletop games, like Betrayal at House on the Hill and even Poker.

It's no secret that Agent Petey really wanted to wear that black mask when they landed in Tulsa. Ingram can apparently relate, since he dressed up like Regina King's alter-ego for Halloween.

Ingram has alluded to his background in musical theater, so that he sings shouldn't come as a surprise. In addition to playing country singer Carl Perkins in CMT's series Sun Records and portraying Alice Cooper on HBO's short-lived Vinyl, he's also released several songs of his own.

So whether Agent Petey turns out to be a Watchmen mainstay or remains in a small role, it seems like Ingram has a bright future ahead of him.