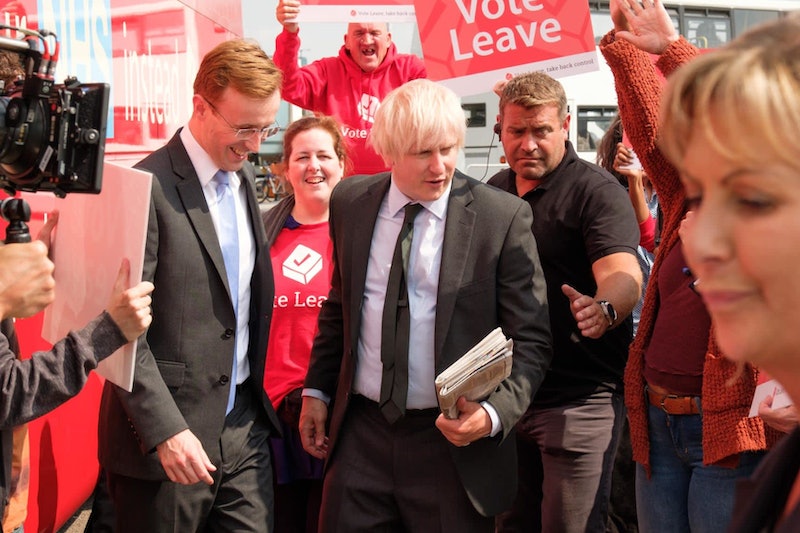 The revolution will not be televised, a wise man once said, which is probably why, if you walk past a TV screen somewhere today, chances are it'll be wall-to-wall Brexit coverage. The news hardly has room for any stories other than Theresa May's continued negotiations and constant reassurance that "this deal is good — no, really," and now Brexit's filling up the TV listings too. Brexit: The Uncivil War is a new show from Channel 4 which takes a fictional, behind the scenes look at Brexit, but who have they cast to play Boris Johnson?

Alongside Benedict Cumberbatch — the man who plays Campaign Director of Vote Leave Dominic Cummings — Richard Goulding will be appearing as the politician with the golden retriever hair. Slightly younger, brighter, and better looking, in my opinion, Goulding is a pretty generous imitation of Johnson. But he still manages to capture many of the former mayor of London's unique quirks.

The makers of the programme describe his character as, "The larger than life former Mayor of London and the very public face of the Leave campaign. A contrarian and a populist whose endorsement may have altered history forever. But does he believe in the cause?"

Goulding, the natural brunette, probably had to don a fairly annoying, itchy wig for his part as Johnson. While it might be his first time having to contend with a toupee, it's not Goulding's first time playing politics. In 2011, he acted alongside the indomitable Meryl Streep, in The Iron Lady as the naval attaché, aka the chief of the general staff of the French Navy.

But while that drama looked at Britain's past, Goulding's caricature of Johnson feels seriously relevant to the times Britain finds itself in right now. James Graham, writer of The Uncivil War, told the BBC that his show is more necessary now than ever as "Drama allows for a pause, a perspective and a longer view. We're in the woods at the moment so we need that." Goulding's character also really lends himself to TV, since, as Graham explains, Johnson is part of a group of "big personalities who don't quite exist in the same reality as the rest of us".

Goulding's pretty good at playing posh people, which he himself admits. "I'm good at being posh — a bit drunk and a bit stupid," he told the Evening Standard. He's also made an excellent Prince Harry — not just once but twice — according to the i Paper. He played Haz in Channel 4's The Windsors, and then again in the 2017 TV film King Charles III which originally aired on the BBC.

But can Goulding out-Boris Boris? You can watch his antics on Brexit: The Uncivil War on Mon, Jan. 7 at 9 p.m. on Channel 4. If you somehow haven't got enough of Brexit (who are you?) then may I also recommend this classic episode of Wife Swap: The Brexit Special while you wait for the next instalment of the saga.