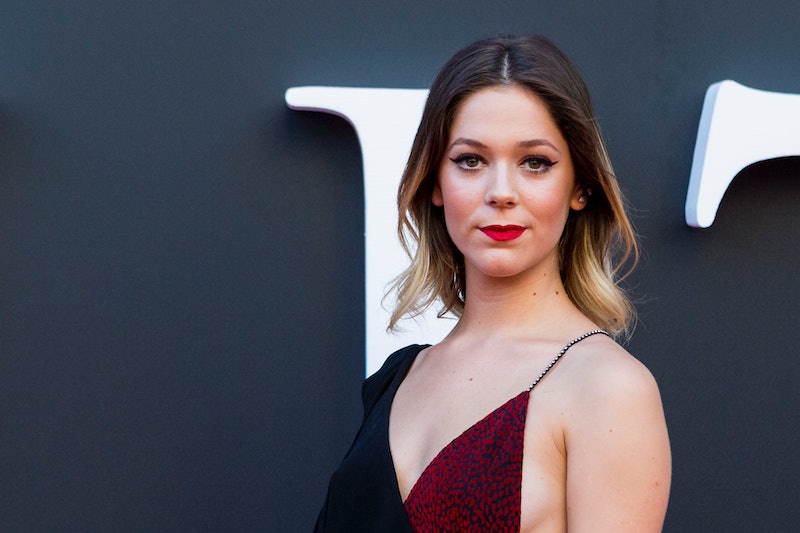 There are some new students at Elite's prestigious high school, Las Encinas, where there's a clear divide between its working class and wealthy students. Whereas last year, the plot revolved around Marina's untimely death, there's a new mystery afoot in the form of a missing persons case. And then there's the new cast, which includes Claudia Salas (Rebeca), Jorge López (Valerio), and Georgina Amorós, who plays Cayetana on Elite Season 2.

According to Variety, Cayetana is a social media influencer with over 39,000 Instagram followers. But just like every other character on the show, she's not quite as perfect as she appears online. "She's apparently happy but has a lot of levels and isn't at all what she seems," Amorós said, per the Variety article. Indeed, social media has always been a huge theme in the show — even the show's artwork is meant to mimic an Instagram story, with bars along the top to denote new posts. "The problem of Instagram is that it that there is no disclaimer saying 'This is fiction' and that can be dangerous," series co-creator Darío Madrona said, per Variety. So what parts of Cayetana's social media presence are fact, and which are fiction?

Whatever the case, Amorós has at least one thing in common with her character, in that she has a large Instagram audience — 101,000 followers, in fact. But that comes with the territory when you're about to star in a successful Netflix show about broody, homicidal teenagers. Here's what else fans should know about Georgina Amorós before Elite Season 2 drops on Friday, Sept. 6.

Previously, Amorós played Àlex in the Catalan comedy Welcome to the Family (or Benvinguts a la família), as well as small roles in the Spanish shows Locked Up (or Vis a vis) and Velvet. So while her role in Elite is still a big deal, she's no stranger to being in front of the camera.

She & Her 'Elite' Costar Have "Dated" Before

Nylon Spain pointed out that Amorós and Miguel Bernardeau (Guzmán in Elite) played romantic interests in the 2017 comedy Es Por Tu Bien (or, It's For Your Own Good).

Amorós Will Be In Woody Allen's New Film

According to Amorós's bio on her agency's website, the Elite actor will appear in Allen's upcoming movie, Rifkin's Festival, which is slated to come out in 2020. Her costars include Christoph Waltz and Gina Gershon (Gladys Jones from Riverdale), and the movie is filming in the Spanish coastal city of San Sebastián, per the Guardian.

The Annie Hall director has been under fire after his adopted daughter, Dylan Farrow, alleged that Allen sexually assaulted her when she was a child, which she recounted in a 2014 open letter to the New York Times. Her brother, reporter Ronan Farrow, then wrote a 2016 article for the Hollywood Reporter, where he supported his sister's allegations, later writing a more damning 2017 op-ed for the Los Angeles Times. The director has denied all allegations, per CBS.

She Has An Adventurous Streak

According to her Instagram, Amorós has been to Paris, Nicaragua, Vietnam, Italy, California, Jamaica, and Morocco, which shows she's not afraid to wander off the beaten path.

She Uses Her Platform

She's Got A Sense of Humor

In addition to the more classic glamour shots, Amorós posts the occasional unflattering photo. In one particular post, the Elite star jokingly referred to herself as E.T., explaining that her brothers used to call her that when she was little.

So whether Cayetana ends up being bad news for Las Encinas or a harmless edition to the student body, fans only have to wait until Friday to watch Georgina Amorós bring her Elite character to life.

More like this
What’s New On Netflix: 'Stranger Things' & 'Somebody Feed Phil' Return
By Arya Roshanian
'Ghost In The Shell: SAC_2045' Was Only Supposed To Last Two Seasons
By Kadin Burnett
17 Hilarious British Comedies On Netflix
By Sophie McEvoy and Sabah Hussain
'Heartstopper's Kit Connor Revealed His Hopes For Season 2
By Nola Ojomu and Sam Ramsden
Get Even More From Bustle — Sign Up For The Newsletter