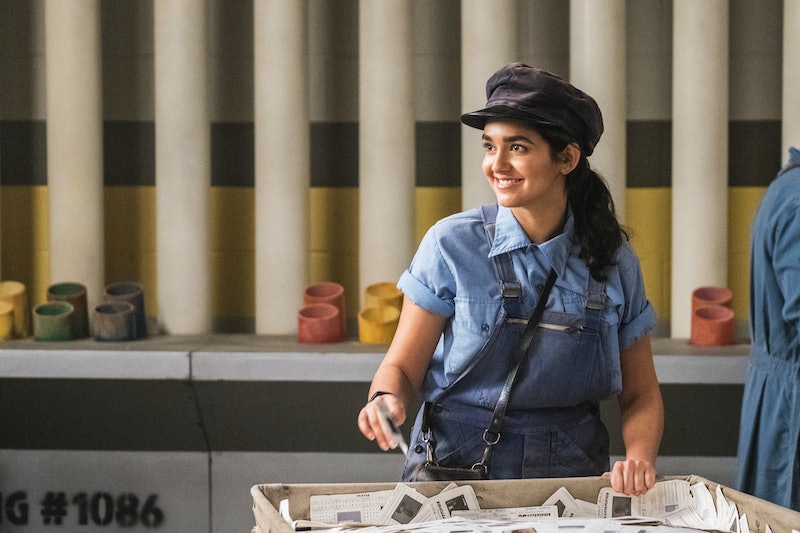 Miracle Workers imagines heaven as a corporation, and suggests that God is nothing more than a bored slacker who has grown tired of tending to Earth. It's an incredibly cynical premise, but it's made slightly lighter by the hopeful presence of Eliza, a new angel who, faced with God's threat to blow up the world, makes a bet with him to pull off an impossible miracle and save humanity. She's doing it for good, but it's also a way to make a name for herself at Heaven, Inc.— just as it is for Geraldine Viswanathan, who plays Eliza on Miracle Workers, to make a name for herself IRL. She may not be an A-lister just yet, but the TBS comedy looks to be just the beginning for what could be a star-making year for the actress.

Viswanathan is most recognized for her standout role in Blockers, a 2018 comedy in which she played Kayla. Miracle Workers' Eliza is fairly similar to Kayla in the sense that they're both optimistic about accomplishing goals, but those roles are only hints at what's to come for Viswanathan, who has two high-profile projects on the way later in 2019. She's starring in the coming-of-age film Hala — which debuted at the 2019 Sundance Film Festival and was acquired by Apple, according to The Hollywood Reporter — and will be playing a crucial role as a student in the upcoming film Bad Education alongside Hugh Jackman, per Variety.

Viswanathan's year is the result of a lot of hard work and dedication, something she proved to Collider when she showed up to an on-set interview in a leg cast. "I was doing a scene where I'm on a horse, and I got into a battle," she explained. "We kept doing it, and on the sixth take, I landed funny and rolled my ankle ... But, you know, it was worth it."

While many of Viswanathan's upcoming roles focus on characters wrestling with who they are and where they fit in the world, she told Collider that her Miracle Workers part is different because "Eliza is kind of the team leader, she's the captain. She is very bold and doesn't really question herself or her ideals." It's Eliza's headstrong nature that makes her uniquely suited to go toe-to-toe with God himself.

Still, Viswanathan has made clear that Miracle Workers is an ensemble show, and Eliza needs all the help she can get. "There's no individualistic hero [in Miracle Workers]; it is such a team effort," she told Variety. "I think that's a powerful message, too, and it sounds kind of corny but a lot of it hinges on love and relationships and coming together."

Viswanathan, though, seems poised to step out on her own, and her turn as Eliza could be her last major comedic role before she ventures more into dramatic films. Whatever the future holds for Viswanathan, her performance as Eliza in Miracle Workers is a great look at an actress primed for success.