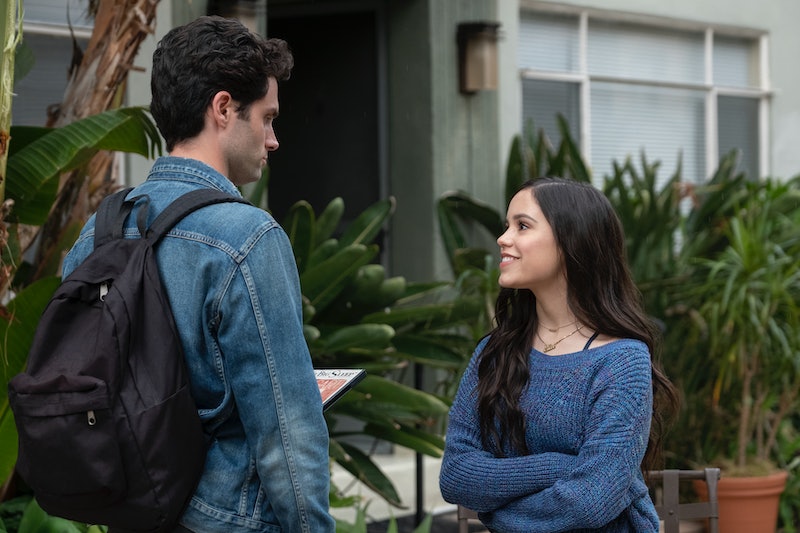 Though Netflix's YOU is based on Caroline Kepnes' eponymous 2014 novel and its sequel, Hidden Bodies, there's a new character in YOU Season 2 named Ellie who isn't in the books. On the show, she takes on a similar role in Joe's life as Paco did in Season 1, acting as a conduit for Joe to prove to the world and to himself that he's really a "good guy" who protects the innocent — and particularly young children, who he seems to see himself in.

Ellie — played by 17-year-old Jenna Ortega — is much more headstrong than Paco, though. She's the younger sister of Joe's neighbor and property manager Delilah, who in the books has an older sister, not a younger one. Just by virtue of growing up relatively unsupervised in the big city, Ellie is wise beyond her years in many ways. In others, she's still just a 15-year-old who probably does need some protecting — although not from Joe, who makes everything he tries to "fix" one hundred times worse and usually via murder.

Still, Ellie doesn't think she needs protecting from anyone, especially not from Joe or her sister. She's fearless, creative, and ambitious, determined to start carving a place for herself in the film industry. It's a much different role for Ortega than her other notable one — playing the demure, rule-following young Jane on Jane the Virgin. Young Jane would probably never be friends with Ellie or vice versa, which is likely a nice change of pace for Ortega. When the news of her casting broke, she posted on Instagram that she was. "So grateful to be joining this amazing show."

In addition to YOU and Jane the Virgin, Ortega is a Disney Channel star. She voices Princess Isabel in Elena of Avalor and starred in Stuck in the Middle as Harley for three years. She also played the Vice President's daughter in Iron Man 3. Outside of acting, Ortega has become a social advocate. Teen Vogue reported that she has a Puerto Rican and Mexican background and has been fighting for refugee and immigrant rights and acceptance in our country through her work with the Pride Over Prejudice campaign. She told the outlet that giving back to her community is really important to her. "I feel that we were all put on this Earth for a reason. We all should do our part to make the world a better place," Ortega said, adding that she wants everyone to feel comfortable and accepted in the U.S.

"It's important to embrace your culture today because there are so many different ethnicities in America," Ortega continued. "At the end of the day, you are you. You've got to stay true to yourself, and you can't change yourself in order to fit in or to make someone else feel comfortable."

In addition to her work with Pride Over Prejudice, Ortega recently traveled to Kenya with the WE Movement to visit local schools and raise global awareness about the importance of education for all. She also took a a direct stand against the controversial "I really don't care, do u?" jacket Melania Trump wore when visiting an immigrant detention center. At the Radio Disney Music Awards in 2018, Ortega sported a jacket that read, in response, "I do care and u should too."

Calling someone out on something, no matter how famous they are, is definitely an Ellie from YOU move. The character isn't afraid to tell it like it is to anyone who will listen, and even to those who won't. With Joe adopting a Paco-like affection for her, hopefully she'll be safe from his murderous ways. But that doesn't mean he's not gonna judge her like he does everyone else. In a promo video for the new characters, Joe's voiceover described Ellie in pretty condescending terms. Though he said she has "potential" and is "creative [and] not scared of anything," he's also clearly disappointed in her attitude towards life.

"What is it about this generation that makes them feel like they rule the world? You need to live in the moment. At the very least, try looking up from your phone," he sneers.

Little does Joe know that Gen Z is actually quite socially conscious and politically engaged. If Ellie is anything like Greta Thunberg, she could end up on the cover of Time one day. But before she gets to any world-changing, she'll have to evade Joe's creepy glass box.