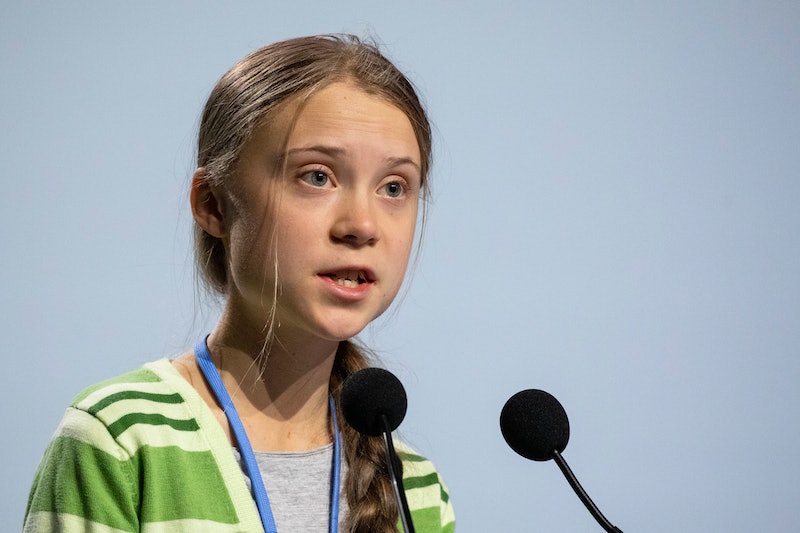 After gaining worldwide attention for her climate change activism, 16-year-old Greta Thunberg is TIME's 2019 Person of the Year. The Swedish teenager is a champion for the environment and policy change, as demonstrated when Thunberg led the global climate strikes for a week in September 2019. Her environmental activism has been on the radar since she began skipping school to do climate strikes in front of Swedish Parliament in August of 2018, leading her to call on students to conduct weekly school strikes as part of her Fridays for Future movement. And this year, she became a key figure in the fight for the environment, even speaking at the U.N.

For the previous two years, TIME has given its prestigious Person of the Year title to groups of people — the Silence Breakers (from the Me Too movement) and The Guardians (journalists who faced persecution for their reporting). But Thunberg, the youngest-ever Person of the Year, broke the mold this year by encouraging four million people to join her in her global climate strikes. The media has dubbed her influence "The Greta Effect," as she inspires teenagers and adults alike to raise their voices and demand that climate change be taken seriously by world leaders. "We can't just continue living as if there was no tomorrow, because there is a tomorrow," she told TIME. "That is all we are saying."

Along with Thunberg, TIME also named other prominent figures for its year-end list. The World Cup-winning U.S. Women's Soccer Team was named Athlete of the Year. Public Servants, like the anonymous CIA analyst who blew the whistle on Donald Trump, are the Guardians of the Year. Lizzo with her massive breakout album Cuz I Love You earned Entertainer of the Year. And Businessperson of the Year went to CEO's Bob Iger.

For Iger's feature, TIME appropriately included a drawing of the Disney CEO alongside a bone broth-sipping Baby Yoda from Disney+'s original series The Mandalorian. The successful launch of the streaming service was a big reason for Iger winning the title of Businessperson of the Year. But many people had actually thought the absurdly adorable puppet star of The Mandalorian in all his glorious meme-dom truly deserved to be named Person of the Year.

Baby Yoda might have not have earned the distinction of Person of the Year, but a 16-year-old girl from Sweden winning the title for passionately caring about the environment is almost as miraculous. Even Yoda from the original Star Wars movies — who knew a thing or two about being judged by his size — would have to see the value of Thunberg being the Person of the Year. Thunberg told world leaders at the 2019 UN Climate Action Summit that they were failing young people with their "empty words" about climate change. And if her brand of activism doesn't follow Yoda's wise words to Luke Skywalker of "Do or do not. There is no try," not much does.

More like this
The 2023 Super Bowl Commercials Feature A 'Breaking Bad' Reunion & Missy Elliott
By Alyssa Lapid
'Bachelorette' Vet Clare Crawley Revealed Her Stunning Wedding Photos
By Stephanie Topacio Long
James Cameron May Come To Regret His 'Titanic' Door Experiment
By Stephanie Topacio Long
The 12 Most Controversial & Unexpected Grammy Moments Ever
By Jake Viswanath
Get Even More From Bustle — Sign Up For The Newsletter
From hair trends to relationship advice, our daily newsletter has everything you need to sound like a person who’s on TikTok, even if you aren’t.