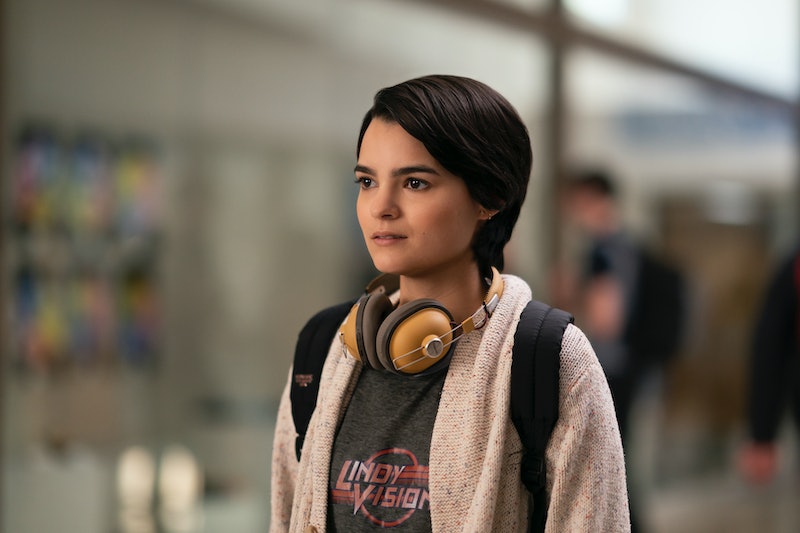 From GLOW and She's Gotta Have It to Dead to Me and Dear White People, Netflix has been slowly adding to its roster of shows featuring complex, messy, nuanced women, and the upcoming Trinkets falls right in line. Focused on three teen girls who meet at a Shoplifter's Anonymous group, the show will explore their budding friendship as they navigate high school and family drama. Two of its three main stars, Kiana Madeira and Quintessa Swindell, are relative newcomers, but you'll likely recognize Brianna Hildebrand, who plays Elodie on Trinkets, as she was in one of the last few years' biggest superhero franchises: Deadpool.

"I chose Elodie because she's just so different to anyone I've ever played," Hildebrand told The Hollywood Reporter. "She's really meek and socially awkward and she's not very comfortable in her own skin … I'm cast a lot as the moody teen, so I thought it would be cool to do something different."

That Elodie is a complex character is in line with Hildebrand's resume, which boasts several projects that help to complicate and redefine the experience of being a young woman today. Hildebrand's first acting appearance was in a 2014 web series called Annie Undocumented, which told the true story of a young Asian girl who learns, via the DMV, that she's an undocumented immigrant.

Hildebrand next acted in and helped her friend to direct The Voice Inside, a short film about a young girl who falls in love with an ex-convict throughout a series of letters. Then, at 19 years old, she made her feature film debut as Negasonic Teenage Warhead in Deadpool — a role that was both difficult and freeing. Negasonic appeared in just one X-Men comic before she was killed off, so Hildebrand had to basically build her own biography and personality for the character.

She trained in muay thai and boxing for the role; as for the shaved head and piercings, that was all Hildebrand's own style rather than inspiration from the comics. "I probably shaved my head like two years ago, just because I felt like shaving my head," she told Refinery29. "I think it’s really cool that women are just like, 'My hair doesn't define me.'" Young women's self-worth is often tied to their hair, so a 19-year-old being entirely chill with being bald is not something you hear often. But it demonstrates exactly why Hildegard is such an exciting, disruptive young actor.

While Negasonic was just a sidekick, she was notable for being a realistic portrayal of a teen; she wasn't sexualized or a stereotypical teen girl, and she was more exasperated by Deadpool's constant jokes than anything. When Deadpool 2 came out, it was also revealed that Negasonic was gay, and her relationship with her girlfriend Yukio marked the first time a mainstream superhero movie featured any LGBTQ representation.

Hildebrand went on to star in First Girl I Loved, a film that delicately explored the life of a teen girl who realizes she likes Hildebrand's jock character more than any of the boys. It was during the filming of First Girl I Loved that Hildebrand came out as bisexual. "It took me a long time, not necessarily to come out, but to understand how I was feeling," Hildebrand told The Independent. "It wasn't planned for me to come out with First Girl or anything. I just so happened to have met my current girlfriend on the set."

After the filming of First Girl I Loved, Hildebrand was approached by the LGBTQ youth campaign project It Gets Better. Aware that some of her fanbase skewed younger, Hildebrand made a video with the campaign about how she knew "pretty early on that she liked both boys and girls" and how she struggled with labels and being accepted. She ended the video reaffirming that no matter where you are on your journey of self-discovery, it's OK, because "you're exactly where you're supposed to be."

She next starred in Tragedy Girls, a beautifully bonkers horror film about two teen girls who flip the script on the usual slasher fare by deciding to be the killers instead of the victims. While talking to ScreenRant, Hildebrand said she was drawn to the script because of the strong relationship between the two leads. "They have each others' back more than, like, anyone's coming to save them, or more than they're searching for someone else to be dependent on," she explained. "They just like genuinely have each other's backs and care about each other. I think that's super awesome. It's like girl power!"

Trinkets looks like yet another interesting, irreverent, emotional project about young women and all their triumphs and failings. It's exciting to see Hildebrand taking on a character that's different than what she's used to, but one that's still expanding the way young women are portrayed onscreen — just as she's done throughout her burgeoning career.