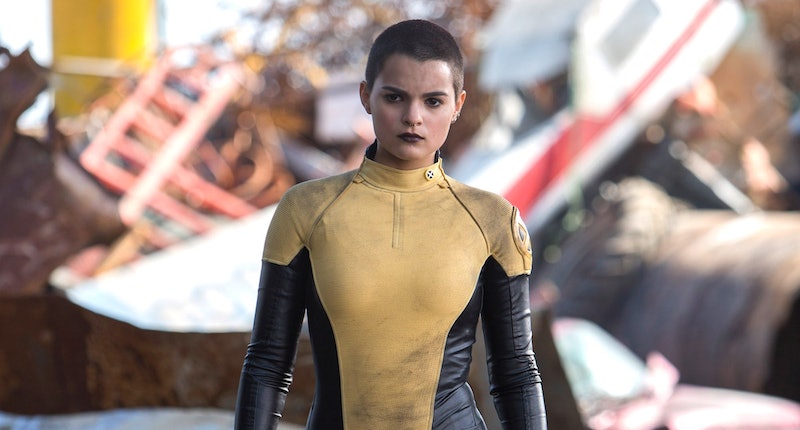 If you've seen the newest superhero epic Deadpool then you know that the real star of the movie isn't Ryan Reynolds. Sure, he plays the main character, and, admittedly, he fills out the red super suit quite nicely. But there is one supporting character that manages to steal Deadpool's thunder: Negasonic Teenage Warhead. Played by newcomer Brianna Hildebrand, Negasonic steals every single scene she's in. Granted, she isn't in too many, but I think fans will agree she's one of the most memorable parts of the movie. In fact, Negasonic Teenage Warhead could be a great feminist addition to the X-Men franchise.

The character of Negasonic Teenage Warhead comes from the X-Men comics, but she herself appears in those pages very rarely. Basically, she's not a huge character in the comics, which, in part, might explain how she ended up playing sidekick in Deadpool. After all, Deadpool is far more focused on Reynolds' character than his X-Men pals, so it makes sense that when deciding which mutants would appear alongside Deadpool, the studio chose to include a relatively inconsequential character.

For Director Tim Miller, Negasonic's anonymity allowed him to mold and change her powers. When developing the film, Miller and writers Rhett Reese and Paul Wernick chose the mutant to be Colossus' student, not because of her cool powers, but actually because of her name. "Her power, I mean, we chose her because we wanted a trainee for Colossus in the film and the writers and I just fell in love with her name," Miller said in an interview with Empire . Negasonic's ability to channel the force and firepower of a bomb was perfected later.

Negasonic's absence from comic book canon, coupled with her new, movie-specific powers, makes her the perfect female superhero to bring to the big screen. She's not tied down by sexist comic book tropes like other, more popular female characters. She doesn't fight crime in a fancy corset (sorry, Wonder Woman), she's not a superhero's girlfriend, she's not the female version of a male hero, and she doesn't have to seduce anyone to show off her powers, which, by the way, are shown as way more effective than those of both Colossus and Deadpool in the final battle of the film.

How much feminist credit Negasonic Teenage Warhead gives Deadpool has yet to be determined. As a minor character, her appearance is still a long way from leading her own film, and she had very few lines of dialogue — not to mention the fact that she doesn't have a particularly easy name. Negasonic Teenage Warhead sounds really badass until you have to yell it out quickly in battle. It's very difficult for casual fans to remember, causing the character to be diminished to "that girl" or "the girl" or "you know, the teenager" in Deadpool conversation. This might seem inconsequential, but it means that for a large portion of the audience, Negasonic Teenage Warhead ends up being more of a weapon than a person — a thing Deadpool uses to get ahead.

Hopefully, the mutant will get to expand her role in the planned Deadpool sequel. Based on the strongly positive reaction to her character, it would be foolish of filmmakers not to invite her to return to the fold, but actor Hildebrand has said that she has not been officially approached for a sequel. She has said, however, that she would love to return to the franchise and the character. "I would definitely want for Negasonic's character to be more explored," she told Yahoo in February.

The studio and the filmmakers need to do right by Negasonic Teenage Warhead, whether or not she appears in Deadpool 2. Let's hope everyone realizes her value before it's too late.

More like this
Everything To Know About The Musical 'Joker' Sequel – & Lady Gaga’s Role
By El Hunt and Sam Ramsden
Stephen Graham’s Wife Plays A Vital Role In His Career
By Emma Madden and Sophie McEvoy
Sky’s New Princess Diana Doc Tells Her Story Like It’s Never Been Told Before
By Frances Stewart
Why Did Meatball Leave 'The Bachelorette'? His Second Chance Didn’t Last Too Long
By Grace Wehniainen
Get Even More From Bustle — Sign Up For The Newsletter