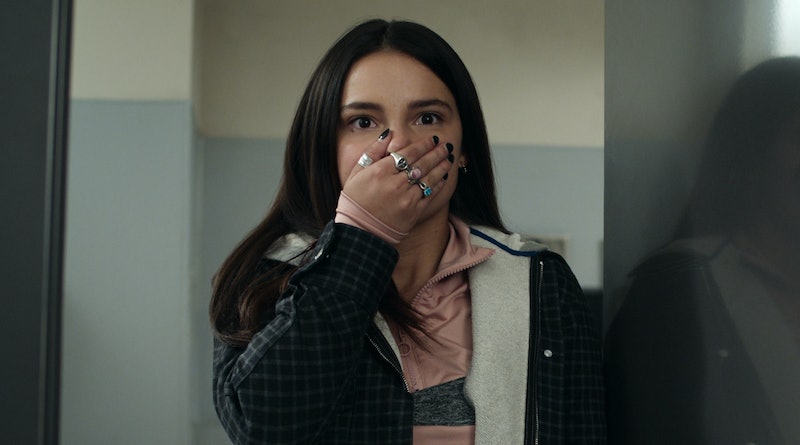 Although it's the final chapter in 13 Reasons Why, there are still some relatively new faces popping up at Liberty High. New characters this season include high school football player Diego Torres (Jan Luís Castellanos), Clay's therapist Dr. Robert Ellman (Gary Sinise), and Monty's sister Estela (Inde Navarrette). And while this Netflix series will be the actor's first high-profile role, she's already booked her next TV show.

In May, Deadline announced that Navarrette will play Sarah Cushing in The CW's Superman & Lois, which is set to debut in 2021. Tyler Hoechlin and Elizabeth Tulloch will play the show's two titular roles, while Navarrette is set to play the daughter of Kyle (Erik Valdez) and Lana (Emmanuelle Chriqui). Sarah, the article says, is friends with brothers Jonathan (Jordan Elsass from Little Fires Everywhere) and Jordan Kent (Alex Garfin).

Here are a few other things to know about Navarrette before she appears in 13 Reasons Why Season 4 on Friday.

She has a great solution for working out in quarantine

In a June Instagram post, Navarrette joked that everyone who was mad about the gyms being closed should just go outside and clean some signs. "I promise your arm will hurt," she told the camera. But despite her funny video, the 13 Reasons Why actor admitted in an interview with The Bare Magazine that she misses going to the gym, too. "I normally wouldn't consider myself a gym person but right before quarantine hit, I was going every other day with my best friend," Navarrette said. "And now that it's closed, I want to go more often."

Instead, the actor explained that she's "going for walks with [her] lovely roommate and [her] mom and doing Instagram home workouts that consistently pop up on [her] feed." Sounds like a good compromise.

In this December 2019 video, Navarrette is dancing with her friends while simultaneously using a beauty blender on her face. "[Y]ou'll never catch me off beat," she captioned the post.

In addition to acting, Navarrette takes artsy photos and videos. "I always start projects and then start new ones without finishing the old ones, but continuously I've come back to the thought that I've always wanted to make my own music (mostly for me to show myself that I can do anything I can set my mind to)," she told Bare Magazine.

That said, she's also trying to be kind to herself in quarantine, claiming she can sometimes be "the laziest person on earth." "[B]ut I always try to stay creative/productive with how I'm feeling," Navarrette continued in the same interview. "If I don't have the energy to physically get up and be productive, I'll do little things. For example, I'll go through emails, color coordinate apps, and create space on my phone."

Hopefully Navarrette is able to occupy herself until Superman & Lois begins filming.

More like this
Netflix Shut Down 'Bridgerton' S3 Rumours About A “Very Dark” Storyline
By Bustle
Here’s Everything Coming To & Leaving Netflix In February
By Jake Viswanath
You Might Want To Rewatch This Key 'On My Block' Scene To Understand 'Freeridge'
By Grace Wehniainen
Ashton Kutcher Wants Danny Masterson “To Be Found Innocent” In Rape Retrial
By Jake Viswanath
Get Even More From Bustle — Sign Up For The Newsletter
From hair trends to relationship advice, our daily newsletter has everything you need to sound like a person who’s on TikTok, even if you aren’t.