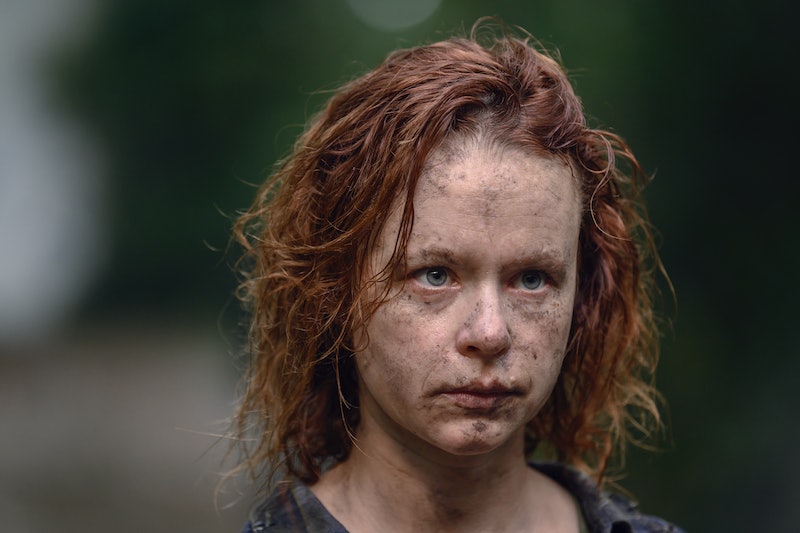 While the Whisperers on The Walking Dead aren't ones to show their real faces, one familiar face is being added to the villainous group for Season 10. Thora Birch plays Gamma on The Walking Dead and this new character will be introduced during Oct. 13's "We Are the End of the World." Like the actor who plays the Whisperers' leader Alpha, Samantha Morton, Birch has had huge success in film before coming to the AMC series. So for fans of her previous movies (in particular, one Halloween classic), Birch's appearance is going to possibly make viewers want to see more of the Whisperers.

The first three letters of the Greek alphabet are alpha, beta, and gamma. So while The Walking Dead hasn't shown Gamma before, fans can deduce she is important to the Whisperers' leadership hierarchy. "We're going to explore a story of somebody who's just part of that group who rises into leadership," showrunner Angela Kang told Entertainment Weekly about Gamma. "I think Thora brings such humanity and also badassery to the role. I'm just enamored with her work and hopefully, other people are too." Even though the Whisperers are the villains, something that might make fans more enamored with this member is Birch's past body of work.

Birch was a famous child star with her first role being in 1988's Purple People Eater. But her perhaps best-known work as a child was in the fittingly-spooky Hocus Pocus. Sure, this Disney Halloween film isn't as gruesome as The Walking Dead. But Birch's Dani held her own against three evil witches who wanted to steal her soul. Even more impressively, the young actor held her own against the powerhouse performances of Bette Midler, Kathy Najimy, and Sarah Jessica Parker.

Another beloved movie of Birch's that she did while she was young is Now and Then. She portrayed the younger version of Melanie Griffith's Teeny, who grows up to be a Hollywood star. But by that point, Birch was already a star in real life and as an older teenager, she went on to appear in the Oscar Best Picture winner American Beauty and the cult film Ghost World.

Since the late '90s and early 2000s, Birch has continued to work in film. But as The Guardian highlighted, there was a gap in her acting work in the 2010s that Birch credited to her not conforming to what Hollywood expected of a young female actor. "I tried to walk a fine line between being alluring and somewhat glamorous but maintain a strong identity and pursue things that were a little more thoughtful, and I guess nobody really wanted women to do that at that time," Birch told The Guardian.

In 2016, she briefly the sci-fi TV show Colony and returned to film. As for her personal life, she got married on Dec. 21, 2018. She made the announcement on Twitter where you can follow her for Walking Dead updates and some political commentary. And if seeing her back on your screen on The Walking Dead this Halloween season isn't enough, you know you can always flip the channel to Freeform to see Birch take on the supernatural x2 in Hocus Pocus.