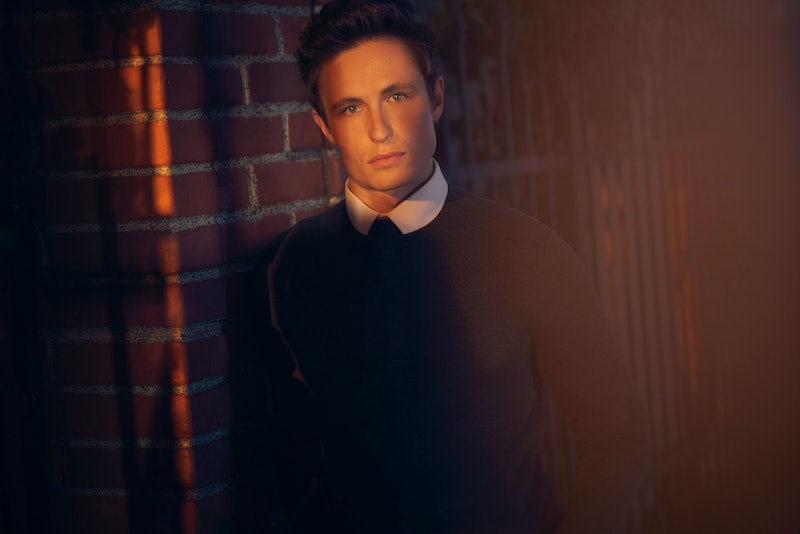 The actor in question is Graeme Thomas King, and he's a relative newcomer to TV and film. His IMDB page only lists six credits, the first of which was as an uncredited extra in 2016's Florence Foster Jenkins. The Perfectionists is his first role in a TV series, and he'll be playing a Hotchkiss Industries scientist, according to the Hollywood Reporter. King told Bustle at a press event last year that he was working in an office when he was discovered by a talent agent on a London bus. He moved to New York City, trained to be an actor, and is now starring in the show that has all the potential to make him a star.

Though he doesn't seem to know what's in store for him, yet. He told Bustle that he actually wasn't a fan of PLL before the role, but he's ready to jump into the show's universe. "I watched the pilot of Pretty Little Liars, but I didn’t watch it before I got the role," he said. "No, I watched it before I did my chemistry test, so I had a sort of three tests for before I got the role. Just to get a better sense of what going on in the world, although one episode doesn’t do it justice."

According to TVLine, the show will focus on Alison DiLaurentis and Mona Vanderwaal, who viewers of the original PLL will remember from the show's original iteration. They're leaving Rosewood behind for The Perfectionists' college town of Beacon Heights, and of course, there's an inexplicable murder to solve, and townspeople who are likely hiding a secret.

King also teased what his character may or may not know about the drama unfolding around him, though he couldn't divulge any real information. "[Jeremy is] very intelligent, and I think he’s new to the States and has come over fairly recently. I think he loves his job, he’s got a great apartment he’s obviously getting paid really well. To not speak maybe?" he told Bustle.

But he said Jeremy doesn't seem like a true villain — he just has his motivations, like anyone else. "As time goes on you learn more about them as people and what drives them, and it’s the same with Jeremy," he continued. "Is he bad? What’s he up to? They all do bad things, but they’re also human. But I like him, as time time goes on you see why he does what he does."

Unraveling all these threads is something viewers can look forward to when the show debuts. Even if you weren't a fan of the first show, Sasha Pieterse, who plays Alison, told Entertainment Tonight that you'll still find something to enjoy in The Perfectionists. "What I love about The Perfectionists is, if you’ve never watched the show, you get it," she said. "If you’re a PLL fan, you appreciate it without it being too much in your face."

So there you have it — a little bit of info about Jeremy to tide you over before more is revealed on the show. Don't get too comfortable, though. If Pretty Little Liars taught us anything, it's that we never know what's around the corner.