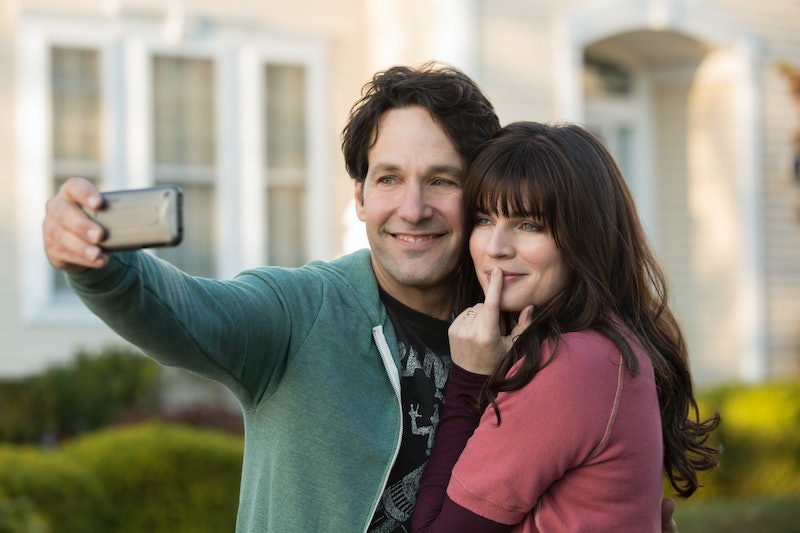 On Netflix's new series Living With Yourself, Aisling Bea plays Kate, the wife a middle-aged man named Miles (Paul Rudd) who awakes to find he's been replaced with a new and improved version of himself after undergoing a "strange procedure" at a local mall. Kate initially seems pleased with her husband's sudden change in attitude, but her true feelings about this "better" Miles do eventually come to light as the season goes on.

Bea tells Bustle just before the premiere of the series that she was pleased with the character as soon as she read the script, which is a nod to writer Timothy Greenberg. "That's the good thing about having just one writer," she says, because as fully fleshed out as the character was, she was also able to give notes about Kate's behavior and what made most sense to her.

It's also rare that a show is entirely written before production, she adds. So she was able to see that her character was developed — and even given her own episode midseason — before signing on. Bea sighs as she adds that oftentimes a writers' room will promise a supporting character, "oh, there's more coming down the line," in terms of depth and dialogue but never deliver. That wasn't the case, she says, on this show.

In an interview with Cosmopolitan, Bea adds that she wouldn't have been drawn to the role otherwise. "You do get a lot of the wife and girlfriend roles, and your head flops a little bit, because I'm a whole person too," she said.

It's clear that Bea is drawn to complex female characters, having played such roles in British TV shows including The Fall, Hard Sun, and Finding Joy. Most recently, she wrote and starred in This Way Up, a show about a woman getting her life together again after experiencing a mental breakdown. She told GQ of her show, "People are so complex and meaty and messy. There are so many things that have to come together for someone to be healthy and to fall apart for someone to get to a point where they can't cope anymore.”

That's true both of her own show and this new one with Rudd. Although his character Miles drives the action of the series as he struggles to grow and become a little more self aware, Kate also realizes that she has some aspects of her personality that she could work on, too. In Episode 5, viewers see things from her perspective and that Old Miles is a lot worse than he already seems — and that she can be tough to live with, too.

So while Rudd's Miles may be the focus of the storyline, but luckily, Kate's journey is just as rewarding.