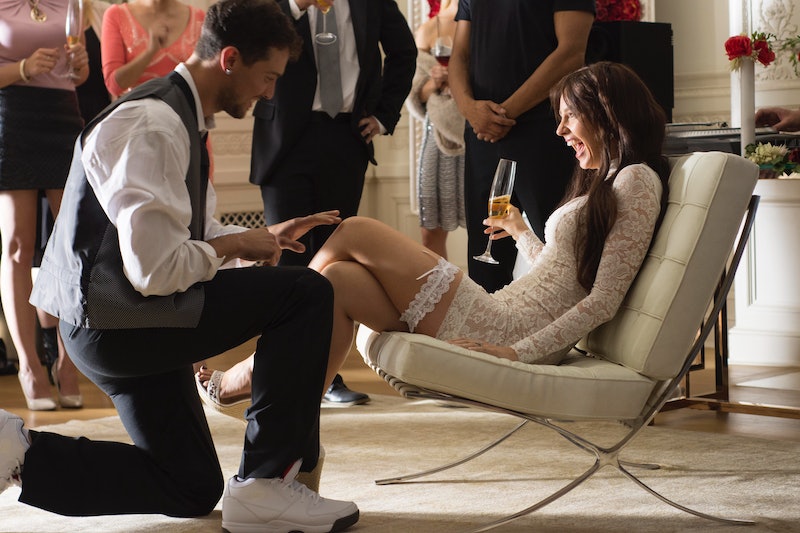 Any Britney Spears biopic wouldn't be complete without the inclusion of Kevin Federline, Britney's ex-husband and father of her two children. After producing unauthorized dramas based on the behind-the-scenes gossip of Saved By The Bell and Full House, Lifetime is finally turning its attention to another '90s institution: The former Mouseketeer who became pop royalty with the release of her first single, "...Baby One More Time." Britney Ever After premieres Saturday, Feb. 18 and stars Australian Natasha Bassett as the troubled but resilient artist. And, since Spears' marriage to her former back-up dancer set a lot of tongues wagging, his role ought to be significant in the TV movie. Canadian actor Clayton Chitty plays Kevin Federline in Britney Ever After.

According to People, Federline and Spears got hitched in 2004 after a short engagement and only a few months after the singer was briefly wed to hometown pal Jason Alexander. There's a lot of material for Lifetime to mine here, including the birth of their kids; their reality show, Britney & Kevin: Chaotic; and more. Chitty appears as Federline in a happy wedding scene in the Britney Ever After trailer, though the movie will no doubt veer into the lower moments as it leads up to the couple's eventual split.

So where have you seen Chitty before? The Vancouver native has amassed a good amount of TV and film credits, including a recent appearance on Arrow, a two episode arc of The Man In The High Castle, working with Hannah Hart and Grace Helbig on their web series Electra Woman and Dyna Girl, and starring opposite Rachel Hunter in Canadian TV thriller Her Infidelity. His upcoming projects include another blast from the past: the cinematic reboot of the Power Rangers.

Chitty may not be a dead ringer for Federline, but the addition of the goatee definitely helps. With it, you might not recognize him from his modeling gigs. Chitty is a spokesman for Gibson's Finest Canadian Whiskey and also appears in ads for Bovarro Watches. Of course he's a model, guys. I mean, he's handsome enough to be credited on certain projects as descriptors like "Dream Guy" and "Douchey Guy." That's model status.

When Lifetime announced the Britney Ever After cast, Chitty posted on Instagram that he was, "extremely stoked to be working with such a great cast and crew on something so #iconic in pop culture!" And he seemed to have had a great time on set, posting pictures from his mom's visit (aw), dance rehearsals, and the process of being Federline-ed, i.e. getting decorated with some of the dancer's signature bling.

The marriage of Kevin Federline and Britney Spears didn't last forever, but Clayton Chitty and Lifetime are doing their part to immortalize that "chaotic," unexpected part of the international pop star's life.