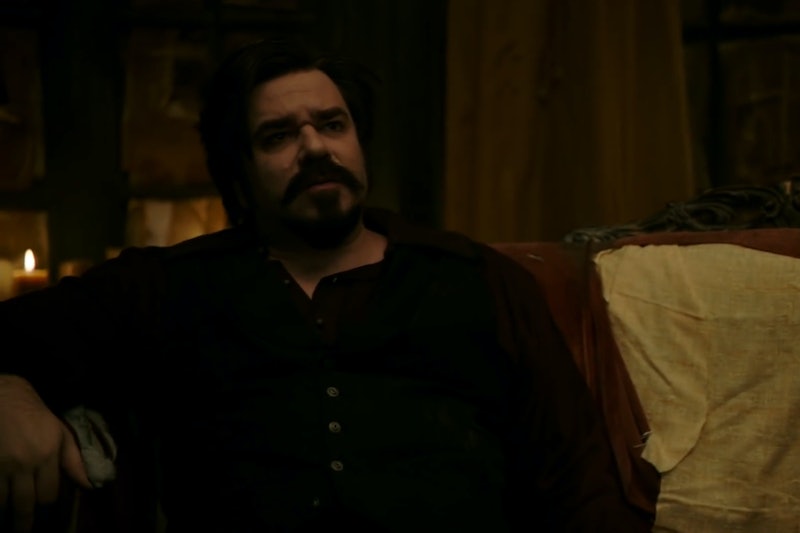 If you're into outlandish comedy, quirky cult films, and vampires, then you're in luck. FX's television adaptation of What We Do In The Shadows — a new take on the 2014 film of the same name — premieres March 27. However, there are a couple key differences between the series and movie, including the show's cast, and you'll want to familiarize yourself with its roster of actors — beginning with Matt Berry, who plays Laszlo on What We Do In The Shadows.

For those unfamiliar, Berry is not just an actor, but also a musician and comedian. Though English, he's become a staple on British and American TV. He played Steven Toast on the UK's Toast of London, and has also had roles on House of Fools, The IT Crowd, Harvey Beaks, and Netflix's Disenchantment.

His work hasn't flown under the radar in the past — critics definitely took note. Berry won a BAFTA TV Award back in 2015 for best male performance in a comedy for Toast of London, and was nominated for a British Comedy Award in 2007 for his IT Crowd role. As for his music career, his discography is full of fun, whimsical tunes, and he's racked up hundreds of thousands of views on YouTube.

Berry doesn't seem to have given many interviews about his role in What We Do In The Shadows, but he's previously talked about what he wants his work to mean. He told The Guardian in 2014 that he always needs to be passionate about what he's doing in order to sign on, whether it's music, TV, or comedy.

"There's no plan. I've just done exactly what I wanted to do. No one asked for any of these albums; it was the same with Toast," Berry said. "I can't do things I don't feel or I don't reckon I'm going to be much good in. It's important to be able to look at yourself in the mirror after doing a job."

Apparently, that mindset has paid off. Berry is already receiving praise for his work as Laszlo, and it's clear that he brings his own specific sensibilities to the part. Slashfilm's Matt Donato lauded Laszlo's "oh-so-very Matt Berry quips that slay over and over," and wrote that viewers are "gifted with Matt Berry playing a very Matt-Berry-esque vampire. That, alone, is worth the price of admissions."

According to What We Do In The Shadows writer and producer Paul Simms, Berry was the first choice to play Laszlo from the get-go. "[Co-creator] Jemaine [Clement] had always had Matt Berry in mind to play Laszlo so that character from the very start was written in that Matt Berry big, booming, grandiose British sort of voice," Simms told Slashfilm.

Berry might not be a household name in America just yet, but with What We Do In The Shadows, he could become one soon. Everyone who's familiar with his past projects will no doubt be tuning in, and he'll likely be picking up some new fans as well.

More like this
Wedding Season’s Omar Baroud Currently Stars On West End
By Darshita Goyal
Nicola Coughlan Shared A Lady Whistledown Excerpt From ‘Bridgerton’ Season 3
By Grace Wehniainen, Alyssa Lapid and Sam Ramsden
Devi Is Going To Meet A “Smoldering Bad Boy” In ‘Never Have I Ever’ Season 4
By Jack Irvin and Gabrielle Bondi
The ‘Emily In Paris’ Season 3 Release Date Is Here, Plus The First Footage
By Bustle Staff
Get Even More From Bustle — Sign Up For The Newsletter