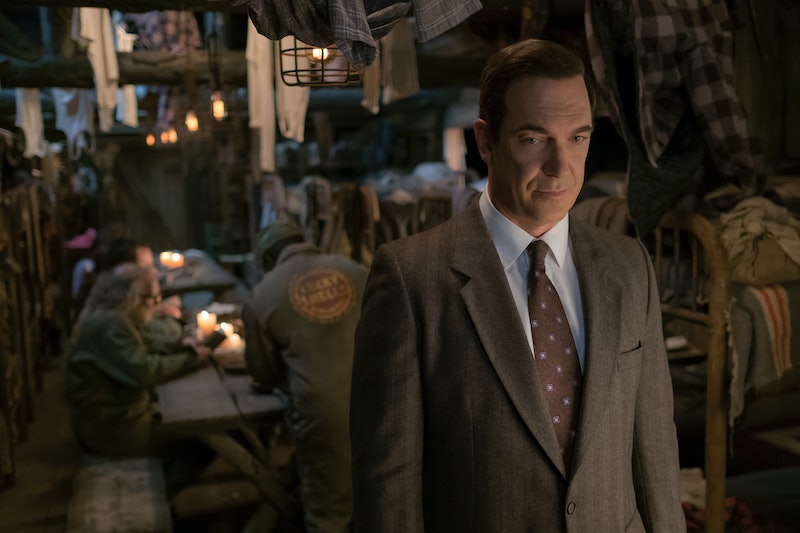 Every good story needs someone to tell it. And every terrible story needs a narrator as well. In A Series Of Unfortunate Events on Netflix, the desperately sad tale of the Baudelaire orphans is imparted to the increasingly woeful audience by Lemony Snicket himself. Snicket is the penname of Daniel Handler, the author of the book series on which the show is based. Snicket's presence in the story is absolutely necessary, as he frequently tells you. Fortunately, A Series Of Unfortunate Events cast a familiar and distinctive voice for the part. Lemony Snicket is played by Patrick Warburton.

And the Netflix series makes excellent use of the actor, inserting Snicket just on the periphery of the world the children are occupying. As I said, an adaptation of A Series Of Unfortunate Events would be lost without a storyteller; Snicket is a fully integrated character in the novels and gets most of the best jokes. ("A word, which here means...") Warburton strikes the perfect chord: stoic, sardonic, and mysterious.

Warburton comes to A Series Of Unfortunate Events in the middle of a very busy career in comedy and voiceover work. If you don't recognize his face, chances are tremendous that you recognize that voice. His resume includes animated series like Kim Possible and The Venture Bros., as well as sitcoms like Less Than Perfect and Crowded. If you're loving him as the patient and articulate Lemony Snicket, check out a few of Patrick Warburton's most famous roles.

Kronk In The Emperor's New Groove

As Kronk, minion of treacherous royal adviser Yzma, Warburton steals scene after scene with his cheerful stupidity. He's just about the nicest guy you'd ever want to try to steal your kingdom and legacy. And he's fluent in squirrel.

For nearly 200 episodes, Warburton has been a resident of Quahog. He voices Joe Swanson, the most easily rile-up member of Peter Griffins' friend group. Joe's tantrums are legendary, and he can take anyone who challenges him to fight. Like many others, Warburton's Family Guy character has also crossed over to The Cleveland Show.

The Tick In The Tick

It only lasted a single season, but you've got to give the guy props for donning a giant blue suit to play the live-action version of cult favorite comic character The Tick. The show is being revived at Amazon and the pilot is available to stream. But Peter Serafinowicz will be taking over the role from Warburton.

Neil Patrick Harris gets the showier part as Count Olaf, and A Series Of Unfortunate Events doesn't lack for playful guest stars. But it's Warburton's brilliant Lemony Snicket delivery that sets the subdued comic tone of the unusual show.

More like this
Netflix Just Rebooted A Classic ‘90s High School Drama
By Maxine Harrison
'Bridgerton’s Jonathan Bailey & Simone Ashley Just Teased A First Look Of “Kanthony” In Season 3
By Grace Wehniainen, Alyssa Lapid and Sam Ramsden
'iCarly' Season 3 Has A Major “Creddie” Cliffhanger To Resolve
By Brad Witter
Everything To Know About 'RHOC' Season 17
By Brad Witter and Sophia Moore
Get Even More From Bustle — Sign Up For The Newsletter