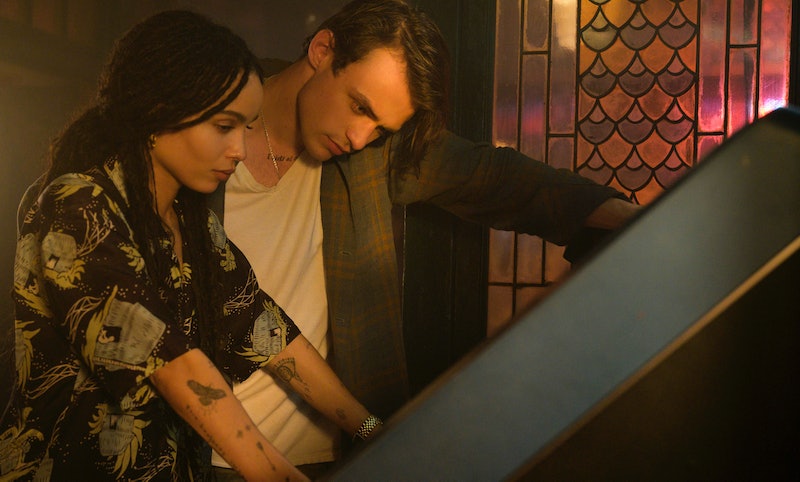 When Hulu's gender-flipped High Fidelity adaptation arrives on Friday, Zoë Kravitz may not be the only recognizable face. Thomas Doherty, who plays Liam, will also be familiar to Disney fans: he previously starred on the network's British musical series The Lodge.

Still, playing Liam — a young Scottish singer Rob (Kravitz) meets while trying to figure out why her past relationships didn't work out — is a big step for the 24-year-old actor. Between The Lodge and The CW's Legacies (on which he portrayed a vampire named Sebastian), Doherty is primarily known for his YA projects. High Fidelity — as well as his recent turn in HBO's Catherine the Great — sees him transitioning into more grown-up work.

Over on Instagram, Doherty posts plenty of glamorous modeling shots and photos of him posing in dapper suits, but don't get any ideas: the actor is happily taken, and has been dating fellow Disney star Dove Cameron since December 2016. Per Us Weekly, the pair met while working on Descendants 2, in which Doherty played Captain Hook's son, Harry, and Cameron starred as Maleficient's daughter Mal.

"Me and Thomas' chemistry was so intense, even off camera...but we didn't know it," Cameron told the teen magazine J-14 in 2018. "But people were like, 'When you guys walk into a room together, it's insane. Have you ever talked to him?' And I'm like, 'No, not really.' And they're like, 'You need to.'"

Apparently, things moved quickly from there. "He told me he loved me within a week of meeting me, and has never taken a step back from that statement," Cameron told Seventeen of Thomas last July. "He's a pure soul. A well-intended, completely innocent source of care and generosity, humility, and never-ending patience. I've never experienced an equality like we have, a real admission of who and what we are together and the guttural knowing that this is right."

More like this
Yes, 'The Price Of Glee' Is Available To Watch In The UK
By Catharina Cheung
'The Last Of Us' Star Bella Ramsey Almost Didn’t Take The Role Of Ellie
By Grace Wehniainen
'The Crown' Season 6 Has Suspended Filming "Out Of Respect" For The Queen's Death
By Bustle Staff
Here’s Everything Coming To & Leaving Netflix In February
By Jake Viswanath
Get Even More From Bustle — Sign Up For The Newsletter
From hair trends to relationship advice, our daily newsletter has everything you need to sound like a person who’s on TikTok, even if you aren’t.