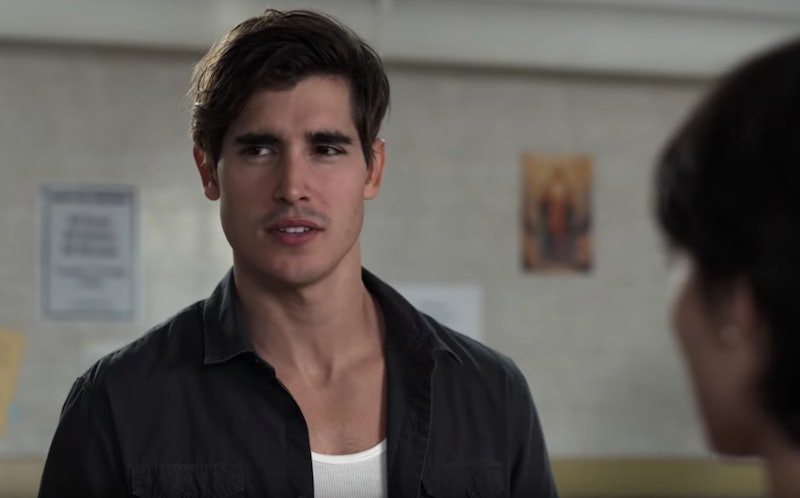 What if you had the chance to relive the magic of watching The Breakfast Club for the first time, but with shoplifting instead of detention? That's essentially the premise of Netflix's new YA drama Trinkets. Based on screenwriter Kirsten Smith's 2013 novel of the same name, the show stars Deadpool breakout Brianna Hildebrand and newcomers Kiana Madeira and Quintessa Swindell as three high school girls who wind up in the same Shoplifters Anonymous group and forge an unlikely friendship. A number of other faces pop up along the way, including Henry Zaga, who plays Luka on Trinkets. So if you watched the trailer and found yourself thinking Hildebrand wasn't the only one who looked familiar, there's a good reason for it.

Zaga has acted in a wide variety of popular TV shows, and based on his previous roles, he's no stranger to angsty teen characters. Prior to Trinkets, he played Josh Diaz on Teen Wolf and made a brief appearance on The Mysteries of Laura as Theo Barnett in 2015, according to his IMDb page. However, he was also in another Netflix hit, which may be where you recognize him from the most: he portrayed Tony's ex-boyfriend Brad in 13 Reasons Why's first season.

In regard to his upcoming projects, Zaga is set to star alongside Game of Thrones vet Maisie Williams in X-Men film The New Mutants, which explores five young mutants coming into their powers while imprisoned in a secret facility. And he's also attached to the John Green mini-series Looking for Alaska, which is set to debut this fall.

Needless to say, Zaga has a lot going on right now and is really starting to make a name for himself, and Trinkets will only help to further his budding career. His character may not be the main focus of the story, but Smith — who also serves as an executive producer for the series — has made a career out of crafting young adult narratives. She wrote the screenplays for beloved rom-coms including 10 Things I Hate About You, The House Bunny, Ella Enchanted, She's The Man, and Legally Blonde.

So yeah, you could say that coming of age stories are kind of her forte, which bodes well for the success of Trinkets — and Zaga. If you didn't know his name before, you certainly will soon.

Natrually, the actor is pretty thrilled to be part of Trinkets and has posted about the show and the cast several times on his Instagram. So to say that they're all close would be an understatement. "What a treat to see my @trinkets family tonight," Zaga captioned a series of fun photos (above) from a Netflix press event last week. "We are so proud of the show, it was as fun filming it as it was watching it tonight."

Trinkets may center around kleptomania, but it could ultimately be Zaga who ends up stealing the biggest treasure of all: our hearts. Catch him in the show when it hits Netflix on June 14.