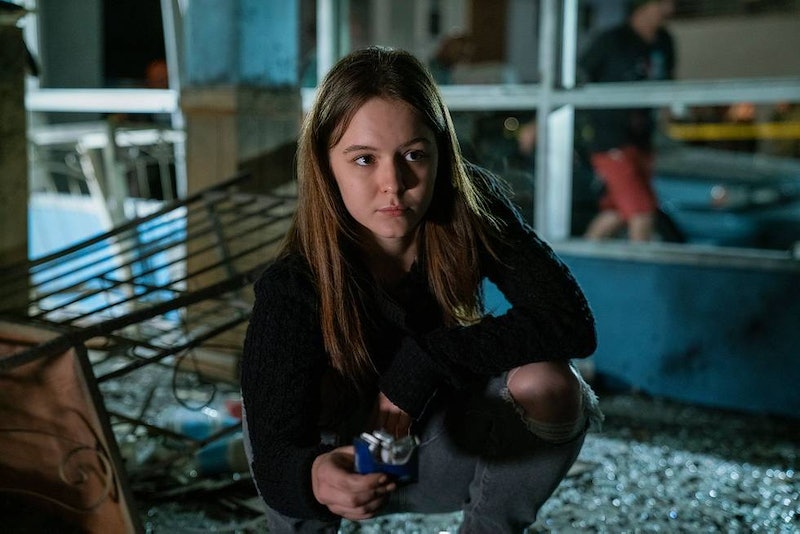 Spoilers ahead for Veronica Mars Season 4. Although the ending to the most recent season of Veronica Mars was traumatic (to put it lightly), there is one bright spot. Young Matty Ross seems to have what it takes to run things around Mars Investigations and Veronica actually seems pleased to pass on the torch. If there are any more seasons of Veronica Mars, it's likely that Matty Ross, played by Izabela Vidovic, will be in them. Like it or not.

But you should like it! She's a great character. In Season 4, viewers are introduced to Matty in the very first episode. She's the teenaged daughter of the owner of the Sea Sprite Motel in the fictional town of Neptune. Before her dad is blown up by the serial bomber, viewers see that Matty takes care of him in the same way that Veronica takes care of Keith — real worry with a side of snark. Later, Veronica picks her up as she attempts to investigate the bombings on her own, convinced that the sheriff's department is on the wrong track.

When she starts spending more and more time at Mars Investigations, under the pretense of charging her phone, it's all but a given that she takes Veronica's place in the receptionist chair.

If Matty Ross does end up helming another season or iteration of Veronica Mars, it would be huge for Vodovic, who is just 18 years old. She's starred in Wonder and The Fosters, so this is not her first big gig, but it is most certainly one with the most loyal fanbase (sorry, Fosters fans).

Funnily enough, her mother Elizabeth, is a writer and movie producer. Vodovic told Flaunt that they've even worked together before. Vodovic said, "My mom and her writing-producing partner directed our production company’s short film, Working It Out. She has been my acting coach since the beginning, so collaborating with her as my director was very natural. She directed me in different ways each take, just as she’s done in coaching me the past eight years!"

She added, "I actually co-wrote a feature film with my mom that explores my Bosnian heritage. It’s about a teenage girl, Sara, whose hopes of becoming a musician appear out of reach — between her paralyzing stage fright and her stubborn, traditional Bosnian father — until an opportunity to audition for Julliard presents itself."

So she's obviously more than talented and ready to take on Hollywood. And that time is probably coming right about now. Kristen Bell said that she'd revisit the Veronica Mars series, but maybe as Matty's mentor or something, adding that the first episode of Season 4 is the "beginning of the end." If that's really the case, Vodovic would be a welcome replacement. Much like her character, she seems smart, funny, and open to solving crime. And she had fun on set, as evidenced by the pics she's posted on Instagram of her scenes and with members of the crew.