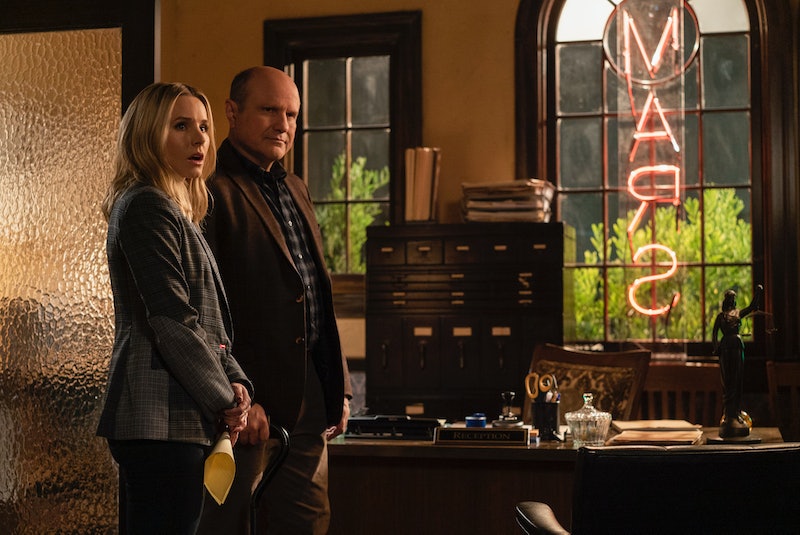 Spoilers for Veronica Mars Season 4 ahead. The fourth season of Veronica Mars went by in a flash and ended pretty tragically. So it's kind of hard to imagine that the series would be renewed again, but if it was — would Kristen Bell return to Veronica Mars? It seems like the series might have moved on from her character a little bit. But Bell is game to do it if the writers insist on torturing Veronica a little more.

"I'll play Veronica until everyone in Neptune is dead," Bell said at San Diego Comic-Con, according to The Hollywood Reporter. "It was a hard decision at first, but then I was like, 'No, you have to have to have this character — this superhero without a cape — out there as an example for your children, and it's going to be worth it.'"

Bell added that she "transferred" all of her emotions that she has in real life as a mother onto "this new character" that she wants to keep as safe as humanly possible.

The character that Bell is referring to is Matty Ross, who loses her father during the first in a series of bombings in Neptune. She's in high school (one of her teachers is Wallace) and already willing to justify some questionable means to a noble end. Veronica easily sees herself in this girl, and takes her on. At the end of the season, Matty is even answering phones at Mars Investigation and walking Pony, Veronica's new dog.

Could she become the new Veronica, and lead the series in Bells' stead? The high school element has been missing, from both the final season of the series, the movie and this new season. There's a scene, in Season 4, where Wallace overhears Matty interrogating one of her classmates and recognizes both Veronica's influence and Matty's potential to become the next kid detective in Neptune. Veronica may be the titular character, but it's possible that, if the show returns, Bell could take on more of supporting role as Matty's mentor.

With Bells' other series The Good Place ending in 2020 with Season 4 (sob) and the new season of Veronica Mars now out in the world, everything is up in the air. Bell could actually be able to don the slouchy camera bag again if Hulu decides to invest in more episodes.

Not to be too dark and twisty, but do we want another season of Veronica Mars after that depressing ending? Maybe the show should keep going to justify the tragedy. Or maybe we should just let Veronica go.

This cast and crew has always been a family. The show's creator, Rob Thomas, is game for another season as well, also according to THR. They clearly love spending time together. What was Thomas' 2009 series Party Down if not an excuse for all of them to chill again? Remember all those videos that they made for the Marshmallows and the Kickstarter leading up to the movie? If Veronica Mars returns, you can bet your bottom dollar that as many of the cast that can return, will return. That most likely includes Bell — there's no way she's going to let them have fun without her.

Neptune needs Veronica Mars, whether she likes it or not.

More like this
This 'Gossip Girl' Wardrobe Error Has Gone Viral On TikTok
By Alyssa Lapid
Rupert Grint Just Shared A *Major* Update About Ron Weasley’s Future
By El Hunt
Here’s Why Danny Masterson’s Hyde Isn’t In 'That '90s Show'
By Brad Witter
A New 'And Just Like That' Table Read Pic Confirms A Key Character's Return
By Jack Irvin and Grace Wehniainen
Get Even More From Bustle — Sign Up For The Newsletter
From hair trends to relationship advice, our daily newsletter has everything you need to sound like a person who’s on TikTok, even if you aren’t.