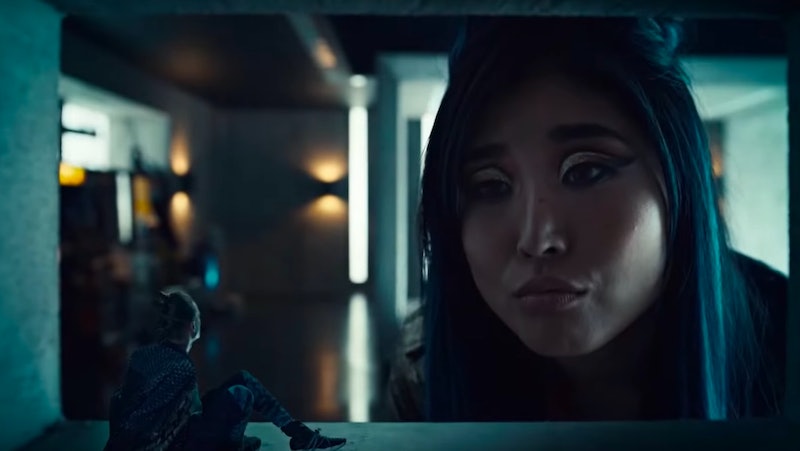 In the America envisioned by author Neil Gaiman, and brought to life onscreen by creator Bryan Fuller (Hannibal), gods of both ancient myth and newfangled technology walk among us in human form. The sophomore season of the series will introduce viewers to even more of these immortal beings. One of these new characters on American Gods is New Media. But why is there a god named "New" Media in the first place? What happened to the old Media?

Without a doubt, one of the highlights of Season 1 of American Gods was Gillian Anderson's portrayal of the goddess Media. From the moment she appeared onscreen in the second episode — literally onscreen, as she manifested to Shadow Moon on dozens of flat screen TVs in the guise of Lucy Ricardo — her fashionable disguises and imperious presence were one of the most consistently captivating things about the show. However, Media will be conspicuously missing when Season 2 premieres on Mar. 10… and she's not the only one.

In the two-year-long hiatus between Seasons 1 and 2, Fuller and co-creator Michael Green departed the series after reportedly butting heads with Gaiman over the direction of their adaptation and with Starz over the ballooning budget of the series, according to The Hollywood Reporter. Their departure also precipitated the departures of Fuller collaborators Anderson (who had worked with the showrunner on Hannibal) and Kristin Chenoweth (Pushing Daisies), who played the ancient goddess Ostara, aka Easter.

Media functioned as the spokesperson for the threatening New Gods, so without this pivotal character, Starz had a sizable hole to fill. Rather than re-casting the role, the writers decided to envision an entirely new character. Enter New Media, played by Kahyun Kim. Whereas the former Media would masquerade in the guise of iconic 20th century media personalities — TV star Lucy Ricardo, film star Judy Garland, rock star David Bowie — the new goddess is less into the old-fashioned visual media and more into the newfangled social media.

This is a change that actually makes sense when adapting Gaiman's novel, published in 2001 at the turn of the century, to the dramatically different media landscape we exist in almost two decades later. As such, New Media is the personification of Facebook, Twitter, and the rest of our interconnected, fast-moving, ever-changing digital landscape: a "goddess of global content," a "cyberspace chameleon," and a "master of manipulation."

To play this chameleon, the writers have cast up-and-coming actor Kahyun Kim. Kim has previously guest starred in episodes of shows like The Mysteries Of Laura, Shameless, and Timeless. Ironically, given who she's portraying in American Gods, she also appeared in the "Adam Ruins The Internet" installment of truTV's Adam Ruins Everything. She also had a role in the award-winning 2016 indie drama Spa Night.

It would be virtually impossible to fill the shoes of someone as iconic as Gillian Anderson. So it's nice that, instead of trying, the writers decided to simply go in a completely different direction. While viewers might be sad to see Anderson go, hopefully they'll be open to seeing what Kim brings to her role. Either way, you can be sure that viewers will be worshipping New Media by offering all their opinions to the goddess of Twitter.