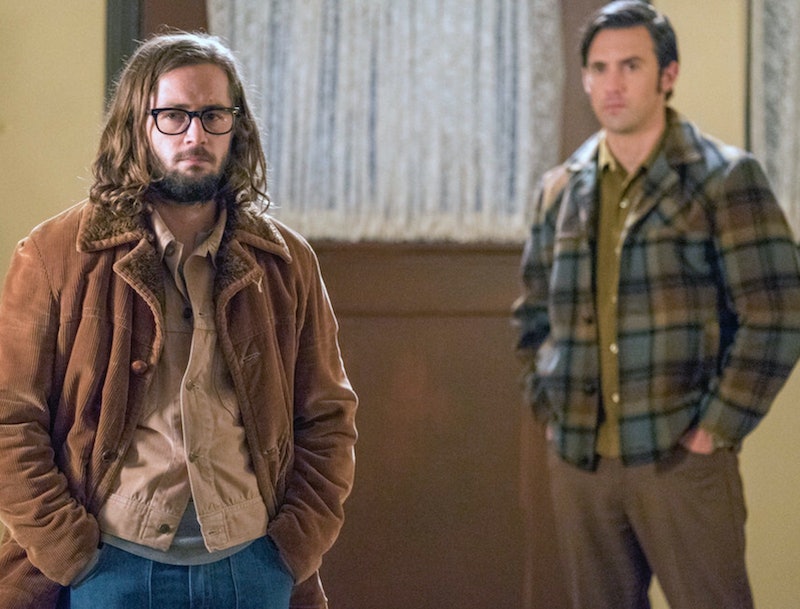 Last week's episode of This Is Us brought viewers a little closer to knowing how the Vietnam War shaped Jack's life. And telling that story would be impossible without divulging more information about Nicky, Jack's younger brother whom, as viewers learned, is basically the reason he went overseas in the first place. The character has been shrouded in mystery for some time now, and the actor who plays Nicky on This Is Us was always going to be lugging around some serious responsibility. Luckily for fans, Michael Angarano seems perfectly up to the task.

Angarano, whose many credits include Will & Grace, The Stanford Prison Experiment, and Showtime's I'm Dying Up Here, steps into Nicky's shoes at a time of utmost importance. Viewers had already seen Jack's brother as a small child, when he perched in his father's car alongside his big brother, waiting too long for their dad to eventually leave the bar. And they'd seen an older, bespectacled version of him, too, through some old photos Jack kept hidden away from his family.

But Angarano brings renewed life to the character, taking up the helm just as a terrified Nicky learns he's been drafted to report for duty in Vietnam, and there's still so much of his character left to explore.

In an episode told entirely in the past, Nicky heads into service. Jack feels helpless that he can't protect him — it's an older brother's only job, his father tells him just after Nicky is born. Jack had previously evaded enlisting for the draft because of what he describes as a "harmless" heart murmur — it's unclear if that condition contributed to the heart attack that eventually claims his life, but it seems too purposeful to be a coincidence. But he ultimately skirts the health requirements and makes his way to Vietnam, saying that even if he can't directly help Nicky make it through the war, at least he'll be in the same place.

The episode ends with Jack finding his way to Nicky's post, and the two brother sharing a devastating look. More is obviously to come, and Angarano told Entertainment Weekly that Nicky's reaction to Jack's arrival in Vietnam is going to be "complicated." "There’s part of him that’s happy. I think there’s also part of him that resents that he’s there. There’s part of him that’s surprised that he’s there," he told the outlet. "And I think in an instant, even though he’s in a completely foreign land, a completely different headspace, and a shell of his physical self, he probably gets 21 years of sibling dynamic in about three seconds. I think it’s the whole gamut."

He also says that it's unclear what Nicky's exact fate will be, but he does hint that things might be out of Jack's control, no matter how much he wants to help. "He’s on a course, and it might be too late by the time Jack has gotten there already. There’s one thing for sure — the man that [Jack] sees at the end of that episode is not his brother," Angarano continued in the same piece.

Though Angarano didn't steer the conversation this way, his comments are reminiscent of the rumors swirling that perhaps Nicky isn’t actually dead in the show’s current day timeline — that maybe Jack says he lost his brother because he lost the man he once knew, not because Nicky necessarily was killed in a literal sense. No one can be certain what Nicky's fate holds, but knowing This Is Us, whatever comes down the pike is sure to tug at our heartstrings.