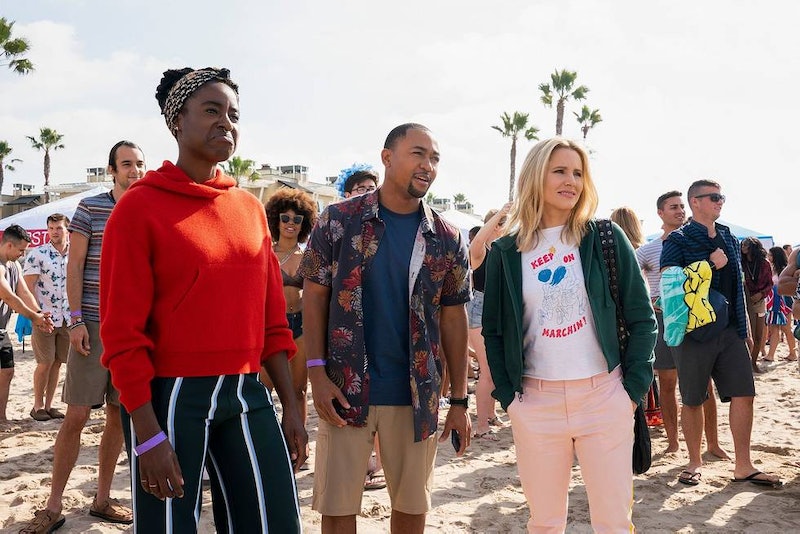 In Season 4, Nicole is introduced as the bartender/owner of Comrade Quack's, a popular Spring Break spot in Neptune. She's got a knack for stopping date rape before it happens, and may or may not have ulterior motives for befriending Veronica. Pity, because Veronica has never really been the best at the whole "friendship" thing.

Fans of Kristen Bell will first and foremost recognize Howell-Baptiste from The Good Place. They staged a mini-reunion in between seasons. In case you don't watch, in Season 3 and the upcoming final Season 4 she plays Simone, a neuroscientist who partners up with Chidi and eventually becomes his girlfriend... until he runs away to the Afterlife. Then Simone is killed by Shawn so that she can join them and mess up Michael's new Good Place experiment.

While Simone and Eleanor aren't ever enemies or rivals really (The Good Place is not that kind of show), it is fun to see Bell and Howell-Baptiste in this slightly different dynamic. The two of them first worked together on House of Lies, actually. Howell-Baptiste was a guest star in Season 4 — and it was clearly the start of a beautiful friendship.

Moving on, name like any other critically acclaimed show of the past two years and Howell-Baptiste is probably either in it or involved with it somehow. For starters, she's in the first season of Phoebe Waller-Bridge's Killing Eve as Elena Felton, who works as the titular Eve's assistant at MI-5 and dreams of becoming a spy. The two of them make a great time.

Unfortunately, according to Carolyn in Killing Eve Season 2, the character quit and changed careers because she was too worried about getting murdered — smart! Fingers crossed that in the world of Killing Eve, Elena and the smitten Kenny still get drinks occasionally.

One lovable assassin was not enough, however. Howell-Baptise can also be found on Barry, alongside another Good Place cast member, D'Arcy Carden. The two of them are both aspiring actors in Cousineau's class.

The Good Place, Killing Eve, and Barry all received series nominations at both the Golden Globes and the Emmys this year. Howell-Baptiste truly knows how to pick good projects, and she herself was nominated for a Screen Actor's Guild Award with the cast of Barry.

Other places you may have seen the actor/performer include a variety of Upright Citizen's Brigade and Funny or Die sketches, the Netflix dramedy Love, the 2017 series Downward Dog as well as A Dog's Purpose.

Coming up, Howell-Baptiste will appear in Marc Cherry's Why Women Kill alongside Ginnifer Goodwin and Lucy Liu (no big deal) as well as Paul Feig's Girls Code and the comedic thriller Happily. There's also the final season of The Good Place to look forward to, as well as potentially more Veronica Mars. With this many fan favorites under her belt, she's not going anywhere any time soon.